Matt White is back in the saddle at Orica-GreenEdge and bang, what happens?

Two stage wins, one thriller for Gerrans himself on stage 3 in Corsica, then the whole team jumps into the act, surprising Sky and Garmin with a monster victory in the Nice time trail that put Gerrans in the maillot jaune.

Now if White can just keep the team bus from hitting any further overhead banners, they should be in good shape.

Garmin rode fast but not fast enough and David Miller, the almost flying Scot, just one second from the maillot jaune, fell another 16 second back. Seventh ain’t bad but it isn’t what they’d mapped out. Career moment gone and who didn’t want to see him in yellow for a few days? Jonathan Vaughters certainly did. 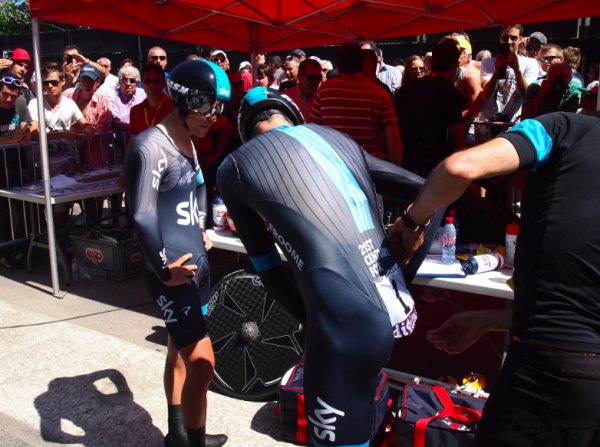 Team Sky’s third place put Chris Froome in seventh overall, three second back of Gerrans but tops for the GC favorites. Alberto Contador is 12th at nine seconds and finally feeling better after his stage one crash. He’s building and you can feel it — Pistolero powering up.

However, perhaps what held up Sky from winning the team time trial was their rear ends. That marginal gain or marginal drag on the behind. I watched for a few minutes as Sky personnel carefully adjusted the race numbers on Chris Froome and David Garcia. It was one of the little moments of hilarity that happen surprisingly often in Le Grand Shindig. You just have to keep watching and walking and walking and walking until you spot something.

David Brailsford will get a high level team of race number application experts to examine the entire issue of race number placement. A report is due before the final time trial. They will fix this thing. Speaking of fix, one of the Sky Jaguars had a flat tire this morning at the start. Not a good omen there.

Bit of disappointment for BMC in Nice. Cadel Evans is 28th overall at 26 seconds but Movistar — Johan Bruyneel’s dark horse pick for the team time trial, did well enough that  Alejandro Valverde, Nairo Quintana and Rui Costa are all 20 seconds behind Gerrans.

There you have it. Orica-GreenEdge the winner with Team Sky bringing up the rear in third.