Nibali in Tour of Almaty. No really.

Home/Uncategorized/Nibali in Tour of Almaty. No really.

Nibali in Tour of Almaty. No really.

Can’t wait to ride Tour of Almaty. Not.

No wait, something odd here. Almaty?

Tour winner Vincenzo Nibali announced he has just ended his 2014 racing season at the World Championships in Ponferrada, Spain but not really.

He’s going to now ride the Tour of Almaty in Kazakhstan because that country sponsors his Astana squad and team boss Alexandre Vinokourov wrote him a nice letter asking him. That’s opposed to the not-so-nice letters he usually writes.

“My season ends here,” said Nibali. “I’ll go to Almaty only because my team asked me to do so.” Vincenzo is dying to go to Almaty — sorry, dying not to go.

The 1.1-ranked Tour of Almaty starts this Sunday but if you look for the race website, there isn’t one — just the site for the 2013 race. Out of website, out of mind.

Still, there is opportunity in Almaty. With no great reason for Nibali to kill himself in the race — he’s just going thru the motions, soft-pedaling and smiling — so there’s plenty of time for a real Tour of Almaty and the surrounding areas of Kazakhstan.

A quick consult of the Kazakhstan Tours website turns up all sorts of exciting activities and cultural excursions. 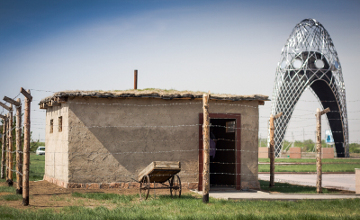 Is Vincenzo hungry? Why not take the 7 day cooking tour in Almaty. He’ll savor the best of Kazakh, Russian, Uzbek and Uyghur cuisine. Yum. No need to hand around the team hotel for a another bowl of pasta.

Is Vincenzo curious? How about Rockets from Baikanur, and attend a real live rocket launch. This may requite some quick paperwork in Moscow but Vino knows everybody and his name opens all doors.

Is Vincenzo feeling artistic? Then look no further than a three day workshop entitled Making Felt in Almaty. It’s a traditional skill in Kazakhstan and by the end of the third day, Nibali will probably have fashioned himself a beautiful Italian fedora.

But perhaps Vincenzo has a keen interest in history and more to the point, the local atrocities. No Tour of Almaty and the surrounding areas would be complete without the 6 day Nightmares From The USSR. It’s a close-up look at the labour camps of the Stalin era and the grim nuclear test sites. Vino will not be joining you but perhaps Giuseppe Martinelli can be convinced to rent a car.

One way or another Vincenzo Nibali is sure to have a fabulous time at the Tour of Almaty.