These complicated UCI contracts bug me.

Confusion reigns. Not, like, which hot models to hire for the new photo-shoot, not what crazy stitching to put on the back of the jeans pockets, not how much cocaine to order for the babes. That’s fun stuff.

No, it’s the damn cycling team. Can’t Ball just concentrate on his business model? The man is trying to make bank in a comatose economy — he has enough worries. And these freakin’ UCI lawyers with their paper work, Continental, half continental, super funky continental, who can keep up with that crap? Is that a category or a hotel breakfast? My boys wanna ride the big races, what’s with the forest-killing paperwork?

The cone of silence around Rock Racing leads us to believe the crazy merger plans and South of the Border license tricks have failed. There will be no Rock Racing Murcia Mexico Mozambique Mars arrangement. Which on comedy alone is a bummer for yours truly. Twisted Spoke is already on record: cycling needs Rock Racing because every sport needs a bad-boy team in black with a skull on the chest. Just basic marketing. Floor tile and ceramic dinnerware are okay sponsors but where’s the sex in that?

What the holy hell cakes — what is going on with Rock Racing? Nobody knows, apparently not even Michael Ball. He’s on a yacht off Tunisia partying hard. He’s at his New York digs looking at Fall 2011 designs. He’s in Milan or Croatia looking at fabric or deep in the denim mines of Central Mongolia. He’s treating his team like a new Rock and Republic concept for socks: he’s interested but it’s strictly back-burner. 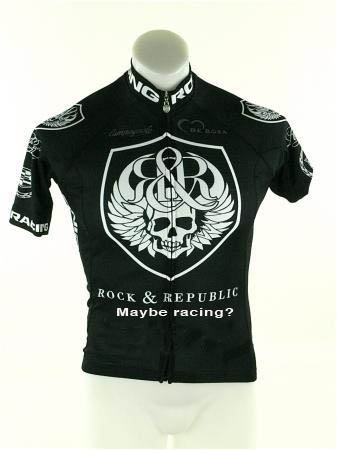 A team dangles in the wind. Are they holing up with Murcia, merging with Mexico or trading international felon Floyd Landis for a Protour license? Are they auctioning off Patrick McCarthy and a few other American riders in an attempt at a fast and cheap Mexican make-over?

Oscar Sevilla is wandering around Colombia with a pregnant wife wondering where his next pay check is coming from. Rock riders Tony Cruz, Freddy Rodriguez, David Martin, Florentino Marquez, Mauro Richeze, Patrick McCarthy and Jose Enrique deserve far better. Floyd Landis, well, really hard to say what he deserves at this point — ask FakeFloyd. (Interesting to note, there is no FakeArmstrong.)

Michael Ball, issue a statement.  Something like “I tried to bring my rock and roll show and my sexy babes to this tired tradition-bound sport but the suits kept wrecking my party. I’ll miss my boys but adios.” Something, anything.

Ball cannot fundamentally understand what is wrong with these UCI people. Have they never been to a party where people had sex in the bathrooms? Don’t they ever have so much fun they puked in the hot-tub? Have they never tried mixing crystal meth with a White Russian just to see, you know, what happens?

Michael, say goodbye to the sport, give your riders a nice severance package and move on. Twisted Spoke is gonna miss you, man.

Special note of thanks to Patron Saint of Twisted Spoke, James Raia at the SFExaminer cycling desk. For his amusing insights on Ball and Rock, click on over.