If we’re honest, we have to admit we miss Manolo Saiz in the world of professional cycling.

He was such a caricature of the angry and indignant and corrupt buffoon. He was instant comedy whenever he opened his mouth to explain his innocence in Operacion Puerto.

He was hilarious as he tried to explain to police his suitcase full of 6000 euros on a day he was meeting with the infamous Puerto dope doctor Eufemiano Fuentes — who may or may not be starring in a remake of the 60’s TV spy show The Saint.

He continues to amuse with his bombastic lies and persecution complex and general bizarre cluelessness. When news hit this week that Operacion Puerto will be re-opened for the third time, five years after the scandal exploded, Saiz was defiant as usual.

He tweeted: “I thank you for all your support, but today is a happy day for me. For the first time in six years I see the goal towards which my lawyers and I have both struggled. There is little to disprove my innocence and we will unmask the real culprits in this story.” We can’t help but wonder who he has as supporters — name anyone who wants him back in cycling.

Scarponi and Basso and Valverde have done their time. Ullrich is still crawling out out a five year depression. Tyler Hamilton is banned forever and has testified to a grand jury that Armstrong doped. Roberto Heras, another of Saiz’ boys, is disgraced, a Vuelta title or two stripped. Sevilla rides in relative obscurity for a team in Colombia. Poor Jörg Jaksche just wanted to make a living as a well-paid domestique but finished as a black sheep.

Manolo Saiz and Dr. Fuentes should have been sentenced a long, long time ago. But we wish there was a place in professional cycling for a man this entertaining. We do have a role in mind. Every morning during the Tour de France, ASO sets up a Village du Depart that showcases the local food and wine and features lots of entertainers. Look at the picture below and tell me Manolo wouldn’t be fantastic as the middle man. 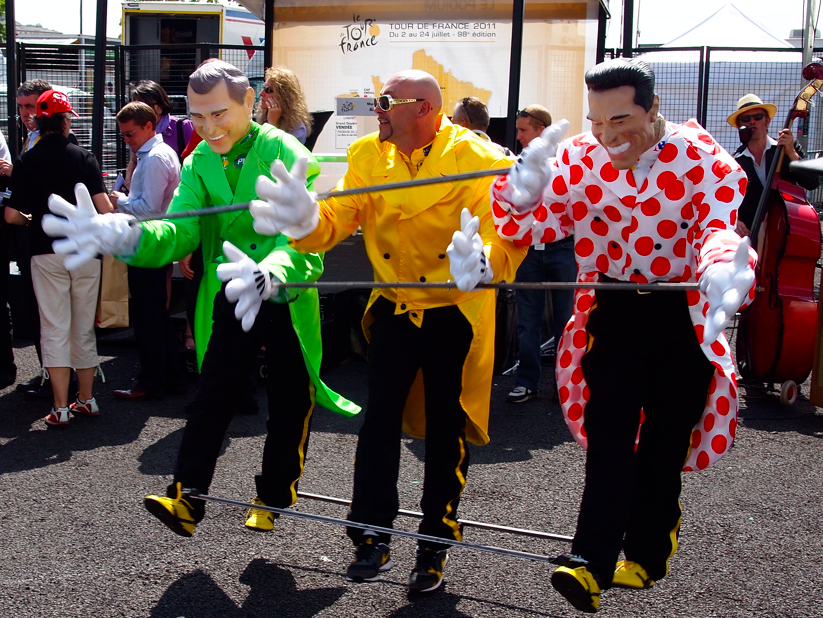 Manolo is ready to play again.