Our congrats to Heather Irmiger and Ross Schnell for winning the 2009 edition of the Single Speed Mountain Bike World Championships in Durango, Colorado. Yee-haw, as the cowboy tifosi say.

Instead of some sizable check and a stuffed teddy bear, winners are given, invited, coerced into getting a tattoo. Suppose they did that at the Tour de France — Lance Armstrong would be inked all over with Credit Lyonnaise bears. A scary thought. Dude, I just won Alpe d’Huez, where’s my Jagermeister and Angel of the Mountains tat? Uhh, no, that doesn’t happen.

But we’re talking about a different sub-culture. The single track tribe is much more of a hony tonk, cowboy hat, tequila shot, high heels with cleats, tattoo parlor and indie rock scene. You ride your bike to the race, the bar, the jail — it’s that kind of vibe. 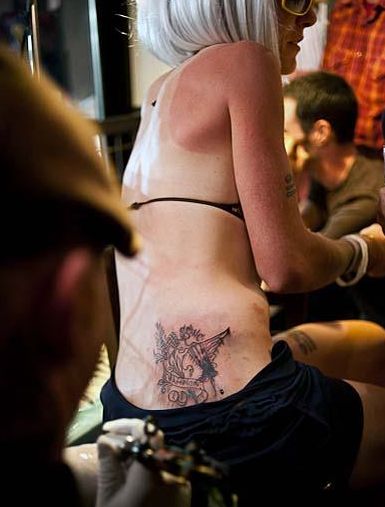 That said, yeah, cool, because a steady diet of overly serious lycra jerks gets tiring. The sad truth is road bikers hardly every buy you a round and their conversation rarely gets beyond training programs and titanium widgets.

The Single Speed Mountain Bike Championship is a huge inhale of fresh air and a really awesome tat. I mean, a chunk of Roubaix cobblestone is great — a nice souvenir. But going under the needle is a whole ‘nother deal. Not an EPO deal either. There is no drug test category for performance enhancing ink.

Our congrats to winners Heather and Ross. You rock. You don’t need a special colored jersey. What good is that? A jersey gets dirty, the color fades and eventually it ends up on ebay or the Goodwill bin.

A championship is an indelible measure of who you are. It’s what’s inked under the jersey that counts.