I spoke too soon.

Back at the press room after the finish of stage seven, no travel disasters endured, night’s hotel booked and rock solid directions in hand,  I made a hasty and dangerous pronouncement. “It’s been a good day,” I said in the vernacular of tour vets. My head shaketh.

Not fifteen minutes later the clouds went black in the Alps and a torrential rain fell, followed by pounding hail and lightning. The alpine roads flooded, trucks overturned, spectators were hit by lightening and several kids suffered hypothermia and were evacuated by ambulance. The Cycling Gods were ticked off about something.

It’s the tour, as they say. Shit, daily, happens. Give up trying to guess what madness will befall you. The mountain road to my cozy hotel was abruptly slammed shut, closed until further Gendarme notice.

My evacuation Plan B sadly and quickly became plan zilch. In the car, headed back down the other direction, I lost sight of the pal journalist with the GPS, aka my best hope. How we got separated so quickly in the exit chaos I’ll never know.

On rare occasion, I’ve slept in cars but at 6’4″ bunking in a micro-economy Renault was guaranteed insomnia and spinal kinks for a week. I looked at the crossroad town signs but they meant nothing. Useless dice, no point in even rolling.

Somewhere Lance Armstrong was getting a top quality massage. Alberto Contador was finishing up a gourmet dinner. Bradley Wiggins was already snug in bed, nodding off to an acoustic version of the Sex Pistols’ God Save the Queen.

I picked the direction for Saint Cloud because it was only 14k away and a decent size town for hotel possibilities. Mostly I wanted dinner fast and I’d deal with room ramifications later. If I was going to suffer through the slow torture of a night in the rental car, I wanted a full stomach and two glasses of French red wine as sleeping pills to cut the pain.

I was driving downhill toward a problematic near future, when I passed a small road side town named Septmoncel, just a two block stretch of buildings left and right. The bright red lights of a hotel restaurant caught my eye. I almost kept going but something told me to stop because having no options, every possibility was equal.

I stepped into the hotel bar to ask my pointless question. A tanned, middle aged women with short brown hair and nice smile said, no, we are full. But then she took the phone off the bar counter and dialed another hotel. No, sorry, they have no place either. The man behind the bar washing beer glasses joined in, “what about the auberge?” Another call, yes, they have a room. I raised my arms up like I’d scored the winning goal in a world cup soccer match. 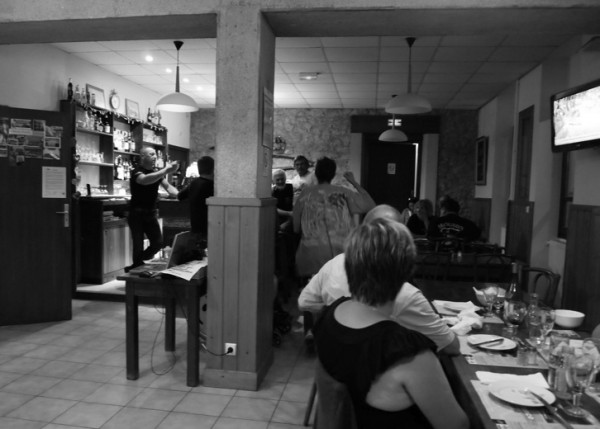 Jean Pierre at the bar.

The woman’s name was Stephanie and I have always loved that particular name. Not in the ugly American pronunciation but in the musical three syllable French way, Ste-Fan-Knee. So the night’s rescue squad consisted of Stepanie Canelle and Jean Pierre Salvi. They fixed my little Tour chaos right up.

I immediately decided to throw myself a personal party at my new favorite place in France, the bar restaurant of Le Hotel des Monts Haute Jura. The kitchen was closed but the Cote du Rhone was still open and a sausage sandwich was on the way. Life was suddenly, ecstatically, freaking good. I was tempting to buy a round of champage for everyone in the place, “drinks on the bumbling American, folks.”

I spent the next hour savoring, eating, drinking, writing, watching the Germans play the Uruguayans for third place in the world cup. Perhaps I’d spoken too soon about speaking too soon. It has been a great day in Le Tour.