It’s never a good thing when the mechanic takes a hacksaw to your new time trial bike hours before your race. Maybe that’s why Ivan Basso finished way back in 97th place.

Mechanics worked feverishly outside the Liquigas bus for several hours trying to fix an issue on the much hyped new Cannondale Slice that was to debut today in the US Pro Cycling Challenge.

Never happened. Despite the concerted efforts of mechanics and personal, Ivan Basso was forced to ride his old time trial rig, his retro Slice.

The problem seemed to center on the  right aero extension tube, which was disassembled but not put back together. When we asked what was going on, a mechanic tried to downplay the issue, saying “We’re just working on some early prototype stuff.” 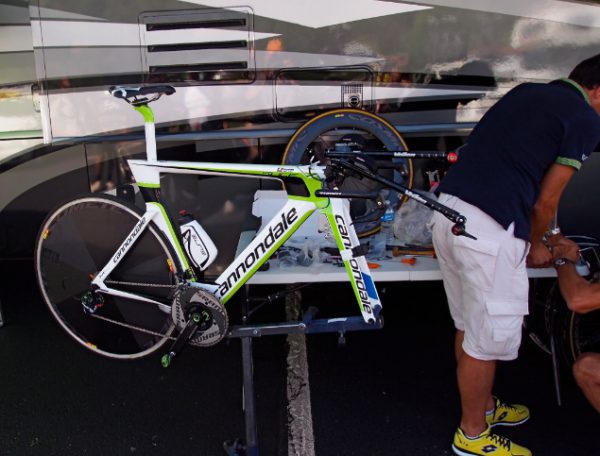 Uhh, too late to be working on early prototype stuff. Basso was due at the start line at the Garden of the Gods. The new Slice wasn’t cutting it. In a trouble-shooting conversation, the mechanic said, “well, you gotta roll with what you roll with. It’s a bit of a shotgun thing.”

As the clock ticked down before Basso’s start, they  pulled the new Slice apart and double-checking the old one. The Italian rider, who was eighth in this year’s Tour de France, got out the tape measure to check his seat height and position. 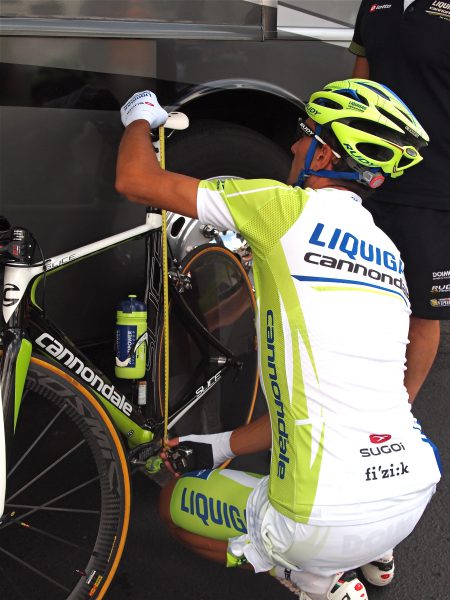 Back to the old Slice.

The seat might have been good but Basso, on his ancient Slice, came in over a minute behind Patrick Gretsch’s winning time of 8:27.

Not exactly what Cannondale was hoping for when they gave the media a sneak peak and photo ops. The bike is a stunning piece of carbon sculpture and innovative technology.

Liquigas and Cannondale have three days to fix the new Slice time trial bike before Thursday’s time trial in Vail. Right now, the Slice is s just not quite ready for prime-time.