Jelly Belly triumph in Murrieta. The return of the Mazich.

Home/Uncategorized/Jelly Belly triumph in Murrieta. The return of the Mazich.

Jelly Belly triumph in Murrieta. The return of the Mazich.

Sean Mazich in a good mood.

All freakin’ right. Hooray for the shiny sugar paste boys.

Jelly Belly Presented by Kendra — who is such a sexy girl — won the Tour of Murrieta. That’s not exactly the Tour of California but it’s a small sub-section of the Golden Bear state — something to build on, geographically speaking. It’s a bite- size Cali snack.

Twisted Spoke has a special fondness for the Jelly Bellys based on the silly name, the joyous and comical team colors and the fact that the first team car we ever rode in, covering our first race as a paid cycling journalist, was the Jelly Belly-mobile. 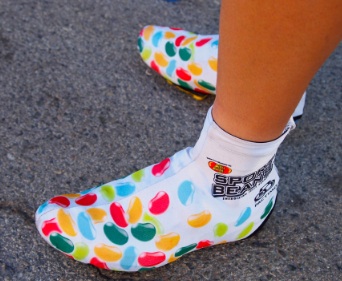 The coolest shoe covers in sports?

They’re fun, they’re cool, they’re low key and team director Danny Van Houte is a hilarious old salt-crazy coot-savant. When one of his riders suddenly pulled off the road in the Big Bear stage, Van Houte shouted “What, he’s stopping to take a piss? On a downhill?” It was non-stop laughter and part of our job that day was to toss free jelly bean packets to the fans.

In fact, one of our favorite photos from the TOC was an image of Jelly sprinter Mike Friedman bombing a descent glued to the rear of the team car. Race commissars tossed him out for that illegal maneuver.

In any case, on top of winning the Tour of Murrieta — Floyd Landis’ old stomping grounds and the area where we recall he crashed messing up his already crappy hip joint. Digression, sorry, but anyway the bonus for Twisted Spoke is that the top Jelly Belly winner was none other than Sean Mazich. 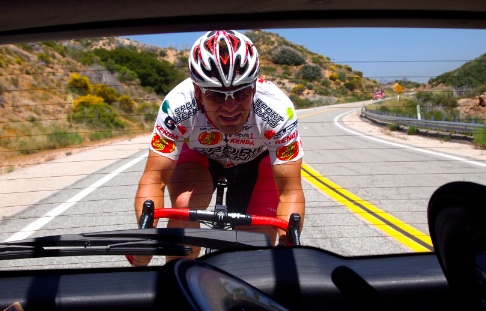 Friedman out the back window.

Now Sean had the terrible misfortune to miss the time cut in stage in stage two of the 2010 Tour of California. We’d jumped into the broom wagon that day and got the painful, up close and devastated look as Mazich rode to the finish knowing his tour was already over.

So we were thrilled to read that the mild mannered and soft-voiced Sean had triumphed. Chapeau, my friend. The Jellys decided this year to skip their usual Tour of Thailand for the exotic local color of Murrieta — as if  jelly beans need more color.

We look forward to seeing these aggressive beans in the Tour of California in May.