Twisted Spoke has been slow and remiss after our two day intensive at Interbike. We were exhausted and suffering from bike overload. It’s sort of like the flu, we couldn’t get out of bed. Or maybe that was the Vegas hangover, hard to tell. 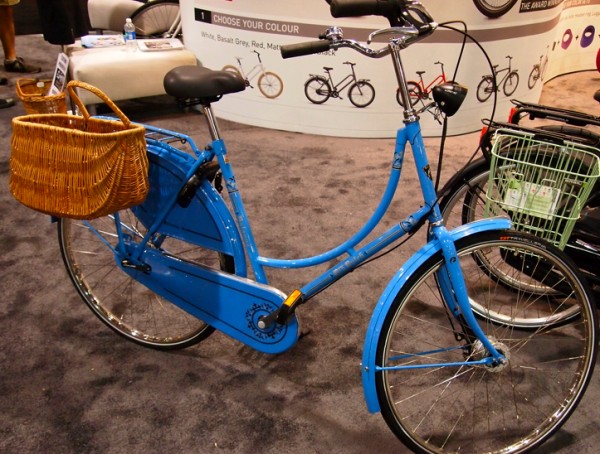 Now multiply that heavan-on-earth bike-topia by 1000 and make it the size of a Costco store. Because the real overload and amazement is the stuff you’ve never seen or imagined –strange carbon frames from China, single speeds from Japan, electric bikes from Germany and Denmark, retro fabulous English touring bikes with leather saddlebags, freaky track bikes hand-painted by coked-up hipsters, concept and show bikes from big companies like Puma jumping into the whole glorious bike lifestyle. You’re wallowing in a sea of profound bikeness and there’s also, occasionally, free beer. You have died and gone to Heavan and God is handing out Pinarellos for free. 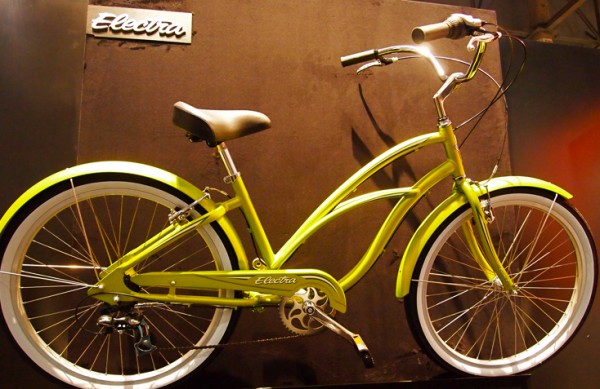 (Curious aside: every single race bike had deep dish $2000 dollar carbon wheel sets on them. Why? Because they looks f-ing fabulous but the fact is, hardly anyone will put those deep dish hoops on since even the lightest crosswind will make bike handling dangerous. This is one of those irritating marketing things that Twisted Spoke is oh-so-familiar with after 20 years in the biz.) 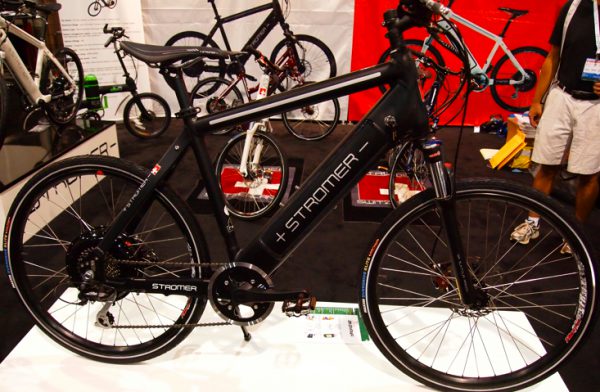 We were particularly obsessed with the whole electric bike category and here’s a new flash: it’s out of control. Everybody and his dog and hamster is making an e-bike. After the 24th iteration of the concept we simply glazed over and lost any bearings we’d established as far as top speed, recharge time, power assist equations, service options and model variations. You couldn’t walk 50 feet at Inetrbike without hitting another e-bike booth and getting electrified again. 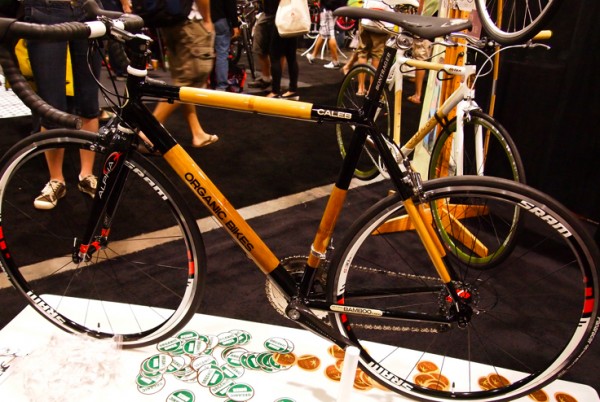 It's organic. Organic is good.

The upshot is, the e-bike tsunami washed over me, I drowned and it felt good. We must have one and personally we’re putting our money on Izip, Stromer and Kilowatt Bikes. The A2B electric bike hybrid was also cool but more in the scooter vein. Yes, if you thought the Dutch bike thing was hyped to extreme, you haven’t seen the e-bike bonanza headed your way. Get your extension cords ready because you are getting wired up.

But wait, as the game show hosts say, there’s more! The vast treasure chest of accessories is far beyond anything you can imagine. It’s like stepping into King Solomon’s Mine (if Solly was a bike fanatic) and finding glittering and funky valve stem caps, exotic tape wrap, hydration systems, handlebar grips, pedals, whacky crimps and ferrules — you name it — or perhaps your feeble imagination can’t begin to comprehend. 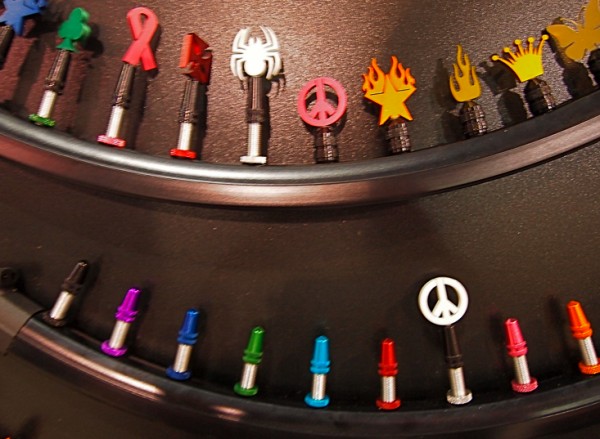 Did I mention clothes? Every piece of lycra known to man and cyclist is hanging somewhere at Interbike. You can’t take it all in — you simply walk past whistling and yearning from afar. There’s just too much to desire and new compression socks are down on our lust list. But make no mistake, the Capo booth made us droll and the Pearl Izumi booth left us breathless with all-consuming need. 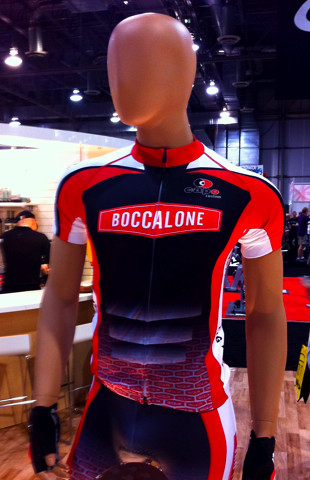 Capo is the boss.

China is in the house. At Interbike you’ll find a city within a city, Chinatown. Booth after booth with companies with names like Suzhou Number 1 Technical Gizmo Factory or YingYang Golden Rainbow Minimum Wage Carbon Fiber Sweatshop.

It is scary and thrilling to see what cut rate brilliance is coming out of China and ready to steal more US jobs and make us surrender our hard-earned bike gimcrack dollars. Many of these booths were relatively empty — was it American Bike Retailer Fear, lack of free beer, paucity of sexy Asian babes hawking product? Hard to say but suggestion number one: guys, a little free Tsingtao Beer lubricates the wheels of commerce. 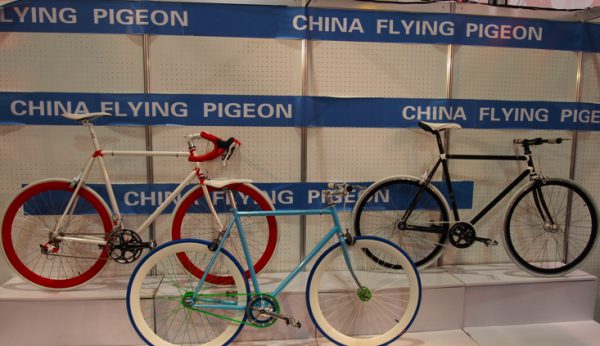 There are goods and then there are the stars at Interbike. You never know who is going to pop in and here’s who we recognized: Eddy, the Eddy, as in Merckx, as in Cannibal, as in signing autographs like a trained monkey or someone who has graciously accepted their marketing slavery. The new Merckx bikes were there with the old Merckx. One was carbon fiber, the other was barely flesh and blood.

From what we’ve read from several sources, Merckx in his senior years in a classy and thoughtful and kind gentleman. However, what we’ve also read is that his health is failing. Now maybe it was just the jet jag and the deadening repetition of signing your name a thousand times, but Eddy did not look well. He was game but I couldn’t even ask for his name on a postcard — I didn’t want to be the one who killed him, death by autograph #798,199. 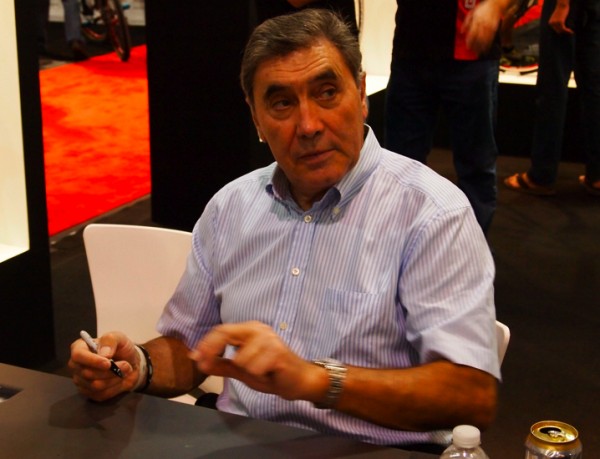 Speaking of not looking well (and surprisingly so) there was famous mountain bike racer chick and pinup girl for the CyclePassion calendar, Willow Koerber. She wore a tight striped mini dress and had her hair teased and puffed like she was doing the runway portion of the Miss Sexy Bimbo pageant.

To our novice eyes, Willow was in that crazed Hollywood zone. Her expression was a weird combination of sparkle and zombie. Her smile was bright, her eyes lifeless, like she’d just done too damn many sponsor events and couldn’t wait to get back to the quiet sanity of her hotel room.

Then there was our man Alessandro Petacchi, the Italian star sprinter, avoiding the clutches of the NAS, the doping police back home. He looked slim, stylish and casually dressed and not yet sanctioned for life. (And can we say that these bikes rock because our high school buddy Sam Parker who owns a cool bike shop in the Colorado Rockies carries them? Yes, we just did.) 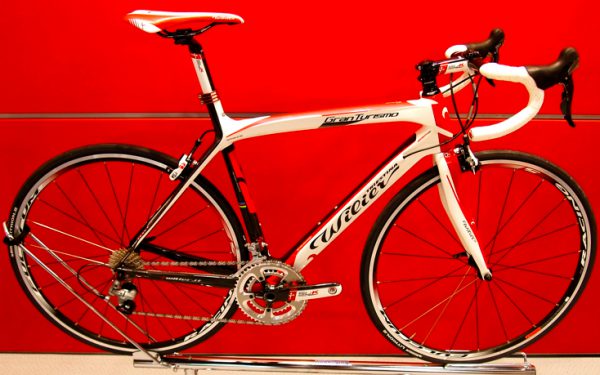 Wilier. Must have soon.

Alessandro was on hand at Wilier, his bike sponsor, for autographs and photographs and Twisted Spoke came away with a nice poster, personally autographed for my son. Thanks Alessandro. We’ll light a candle for ya but our gut feeling is, it’s over. Frame the green jersey and enjoy the free drinks for life.

Practicing his new fame and fortune, Ryder Hesjedal, was signing jerseys at the Garmin booth with a big smile on his face. While Hesjedal is a generally quiet and serious guy in public, he’s stepping up his game post seventh in the Tour de France. His signature is fast and steady — unlike Eddy Merckx and his exhausted pen. 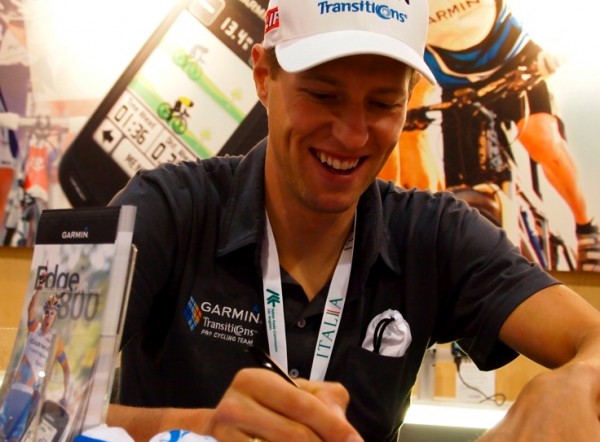 Now, at the press conference for the non-announcement of additional non-news on the Quiznoz Sub Sandwich Tour of Colorado, Ryder announced he was as excited as big George Hincapie. Which is to say, yawn. Which is to say, both guys were genuine and dull. It pains us to say this but old school pro Davis Phinney, suffering from full body Parkinson’s, working hard to barely control his entire body, was more animated on stage when talking about the Q Race. Jesus, we stepped on an IED there because we are Garmin Fan number one.

Then there was our personal favorite over at the VeloPress booth, editor of Bike Magazine and author of A Dog In A Hat, Joe Parkin. We’ll admit up front that we are pro-Joe: we love his unique insider tale of racing in Belgium in the 80’s and he also paid us to write for his new Paved magazine venture. 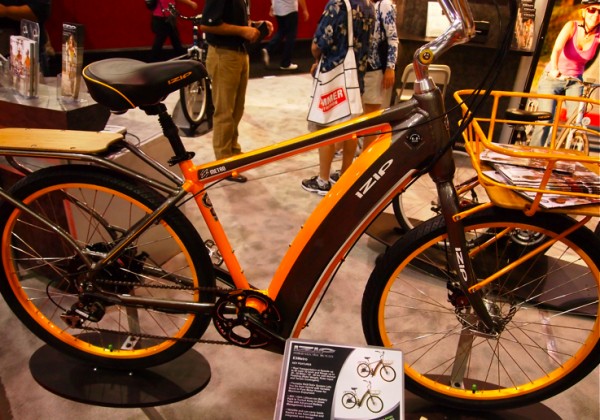 Still, he’s a cool, laid back and funny guy and put a personal message on our copy of his new book Come And Gone. We want to dress like Joe in his skinny black jeans, side buckle scuffed black boots and long dark brown slighly curly hair and chunky frame glasses. But our hair is grey and falling out and really, there’s no hope.

So that’s Interbike except for the expensive Vegas hotel, over-priced restaurants, unaffordable strippers and yes, astonishing lack of free beer. Next year the show moves to Los Angeles where food and lap dances are cheaper. However we will miss Vegas if for no other reason than our fabulous evening at CrossVegas.

(Special thanks go to Twisted Spoke photographer Paul Andronico for his vision and navigational skills.)