My nose has sniffed the future of endurance sports and it was beautiful.

Day one of Interbike gave me the opportunity to get an up close and product-y with the 100% Speedcraft Air eyewear.

This is the fancy, pricey, 80’s vibey eyewear that three-time World Champion Peter Sagan wears when he wins a brutal one day classic on the cobblestones like Paris-Roubaix or takes the sprinter’s green jersey at the Tour de France year after year.

Having spent my career in marketing making up all sorts of haft-truths, I’ll admit to a certain suspicion regarding an eyewear design that not only promised optical clarity but also, strangely, uniquely, a better breathing apparatus in the bargain. 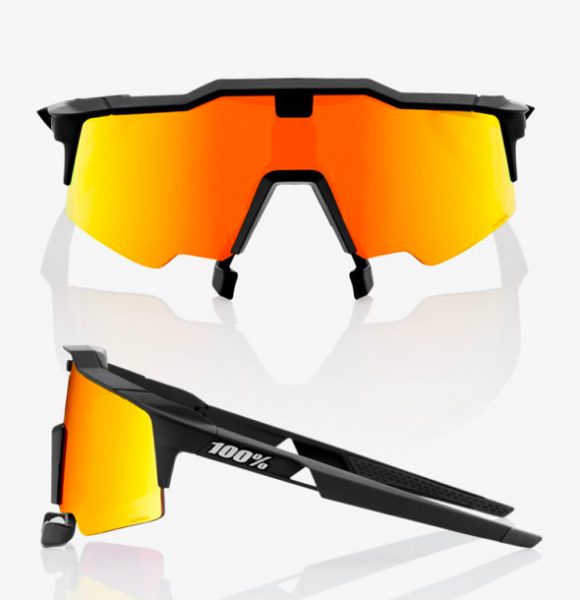 I got the full demo at the 100% booth and came away converted. Enough to want to plunk down $325 for the Speedcraft Air with HiPER Red Multilayer Mirror lens.

The “nasal dilator” part of the experience is disconcerting and exciting. Here’s how it works. You tear open and take out a moist towelette from the set of small packets that come with the Speedcraft and proceed to wipe the oil off the sides of your nose. Then you take a small black rubber applicator — basically a plastic nubbin — and stick a small round magnet on each side of your nose. It’s simple and quick, sort of a magnetized version of a Breath Right strip.
Then, the magic. You slide on your Speedcraft and instantly the extended nose side pieces (also magnetized) snap onto the magnets on the side of your nose. Wow, that is not an experience I’ve ever had before. It’s dramatic and breath-changing.

The next revelation happens when you slide the dial at the top center of the Speedcraft lens. This action will move the nose side pieces out wider, pulling the sides of your nose out and opening your nasal passages. It’s basically the ability to dial open your breathing. Thats quite a meaningful benefit in an endurance sport like cycling where optimizing your breathing will lower all kinds of stress factors in your body and allow you to perform at a higher level.
I will have to repeat that turning a dial on the top of your eyewear to expand your nasal passages feels dramatic and significant. I was dying to immediately jump on my bike and jam up a major climb to see how differently my breathing and heart rate and perceived effort would change.
There are all kinds of scientific studies about the benefits of breathing through your nose versus mouth breathing. As an asthmatic kid and someone with a long narrow nose and partially deviated septum (since surgically straightened a bit) I was highly excited about this Speedcraft effect.
Now, that brings us to styling. I won’t be the first to point out the Speedcraft’s homage to oversized 80’s eyewear. It almost looks like this came out of the Oakley or Nike vault as a vintage rework. That said, it’s not throwback as much as an update. And you could argue that the slightly chunky frame angles and styling stick out in a world of minimalist sleek.
Without a pair for review, I can’t speak to the optical clarity of the lenses other than to say the iconic word Zeiss. Yes, German precision engineering with a long rep for obsessive perfection. I’m working on getting.a pair for for test so stay tuned.
The Speedcraft comes with the HiPER Red Multilayer Mirror lens and a clear version,  travel case, a package of cleaning wipes, magnets and applicator. You can purchase refills on the magnets and wipes on the !00% website — although I suspect you’d do fine with cotton pads and rubbing alcohol for the cleaning.
Final word: The Speedcraft Air is an intriguing concept that’s different for any eyewear on the market. If you like breathing better, I’d say they’re worth a serious look. And if you’re not into the Air, there’s always Sagan’s new Glendale.
100% website
Speedcraft Air
By walshworld|2019-02-03T15:43:50-08:00September 23rd, 2018|Product Reviews, Uncategorized|0 Comments