Attention getting headline. Sorry, but Twisted Spoke stands behind this with 100% journalistic accuracy.

Let’s examine the Qatar question. Easy to pin on a race number in a foreign country without realizing the ramifications.

We’re talking about fit women in tight lycra in a three day bike race in the Arab country of Qatar which is mostly muslim. Danger abounds.

Where did we put our bikes?

The stated goal of the club, the only Muslim cycling group in Britain, is to get women out riding. But as you can imagine, wearing the full hijab scarf and jilab, the long black dress, not only makes for a cumbersome ride but plenty of raised eyebrows.

One of the club members, Alema puts it this way: “if you want to wear a veil, it’s going to be a struggle – but this life is supposed to be about struggle.” You see, cycling throws all kinds of challenges our way, but we say chapeau, ladies.

“You don’t see many women out cycling, especially in the hijab,” says fellow club member Rajana, who is in her twenties. “I’m a bit of a rebel,” she says. Rebel yes, but what if you’re half naked wearing loud lycra in the middle of Qatar?

Twisted Spoke found a basic “Dear Allah” column where this “ride –don’t ride” philosophical issue was discussed. There’s in fact confusion in the Muslim world about whether women should be allowed to ride bikes.

We quote a curious Muslim woman in the reader forum: “My husband thinks it may be forbidden because a woman’s breasts or buttocks might bounce up and down and cause men to look at her. But I think he is wrong because the women in the days of the prophet rode camels and horses.” Yeah, but what about on a $5000 racing bike like the Ladies Number 1 HTC-Columbia club? 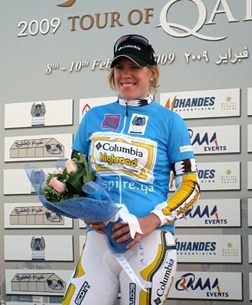 Veil or no veil?

The real issue comes into tight focus when you read the male response to the Muslim Ladies Cycling Club. ““Women should not be riding bikes. They are stimulating themselves. If they want to stimulate themselves they should get a man,” said one fellow who will never get another date.

In short, this is something HTC-Columbia riders should discuss among themselves before proceeding to Qatar. Personally, we support riding a bike with or without clothes and any combination in between. We also totally respect the right of each culture and religion to make its own rules.

There’s a sensual mystery to the veil and a momentary glimpse of bare calf as a women cycles by might be far more exciting than the look-at-me day-glo lycra. There’s no question that in the West, everything is too pornographic — not that we’re complaining.

We just think team director Ronny Lauke might be underplaying the situation when all he’s concerned about is the heat.  “The latest forecasts say it’ll be nearly thirty degrees during the day, which is thirty degrees warmer than most of Europe. That’s quite a difference,” said Lauke.

Twisted Spoke says don’t worry about the heat, the real issue is offending the locals. A long lycra jilab dress with sponsor logos may be a bit tricky to race in, but why take unnecessary risks, right?

P.S. Go easy on the stimulation.