Gilbert in the Vuelta.

We need to ask the question now because it’s unavoidable, the lycra elephant in the room. Is Philippe Gilbert the Michael Jordan of cycling?

The man’s in the crazy good zone and has been for two years. He decides what races to win. Despite being marked by everyone on two wheels, he still dictates the race, the strategy and the outcome. The cycling savvy will interrupt yelling inflammatory bombast about him not winning Paris-Roubaix or Flanders. Yeah, got it, sit down, shut up.

To use the charming film and cycling term, the man “animates” races. This is a pedaling Pixar for saying he is the man who decides who eats the steak, who’s stuck with the tasteless vegetables, who goes hungry and who does the dirty dishes.

The Michael Jordan comparison is not out of context or unmerited. Philippe Gilbert is on fire and everybody is watching the conflagration and not even attempting to call the guys with the long water hoses and tall ladders. You cannot put out Philippe Gilbert, okay?

If the man doesn’t look down from the top step of the podium, he makes damn sure he’s still getting some second or third hand champagne spray. Look at last year: two stages of the helta skelta Vuelta, first in the Giro di Lombardia, first in Amstel Gold and thirds in Flanders and Liege.

Generally a slow starter, Gilbert decided to ramp it up early this year. Already he has stage wins in the Volta ao Algarve and Tirreno-Adriatico plus a beautiful win on the White Road of Tuscany, the Montepaschi Strade Bianche.

It’s important for the Jordan comparison that we look at how the wins are won. Gilbert isn’t a sprinter carried to the last 1000 meters by a train, merely icing the cake with a high speed burst. Gilbert wins by simply riding away from the strongest riders in the peloton when he determines the moment is right. 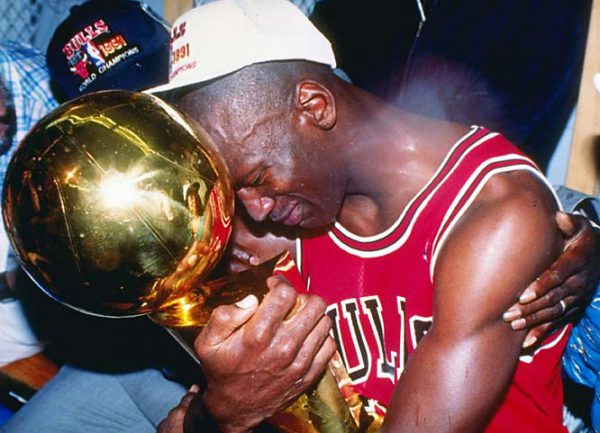 Jordan was a star who made his team stars.

In his prime, Michael Jordan imposed his will on his team and the entire NBA. He was a force of nature, a divine wind, an executioners song, a king of kings, a champion and a legend.

But in all discussions of star power and their relative stratosphere, the true measure is not the skills of the man himself but how much better he makes every single player around him. Jordan, with a hand from Scotty Pippen, took a motley crew of Chicago Bull nobodies and forced them into greatness.

Is Gilbert raising the bar for the entire Omega-Pharma-Lotto squad? Is he providing the kind of contagious leadership, motivation and confidence that lifts his team to unexpected brilliance? Does he make every rider raise his game and perform at a level impossible to reach without the Gilbert factor? It’s a good question to ask.

Is Gilbert taking the young and green but talented Jurgen Van Den Broeck aside and telling him in no uncertain terms with a force of will and unquestionable insistence that VDB will crush Alberto Contador and Andy Schleck in the Tour de France? That’s the million dollar Jordan question.

Is he spending his spare time with Jurgen Roelandts, Sebastian Lang or Óscar Pujol and telling them they will kick ass or else and he will send detailed instructions on each ass to be kicked so there’s no confusion?

Is he pulling Andre Greipel aside and giving him the psychological work-over — a potent combination of building up the Rostock Rocket and tearing down the Manxman? We’d love to hear the conversations on the training rides and at dinner. Is Gilbert holding court, is he taking names and serving notice? Is he screaming at teammates that show any sign of slacking off?

Is Gilbert calling young brit Adam Blythe and yelling in his ear, “I want blood, I want the knife in deep, I want to see bodies.” We’d sure like to know.

Veteran Chris Horner rode for two great champions: Cadel Evans and Lance Armstrong. He said the difference was that Evans made sure he was always in top shape while Armstrong raised the game of everybody on his team. Can Gilbert do the Jordan-Armstrong double?

Philippe Gilbert is a man on fire but the question is not about the the flames but how far the fire will spread.