Yes, it’s December, holiday madness, time to get off the bike and uhh, shop for bike stuff. Here are some of our faves, must-haves and unique gift ideas for every cyclist making your benevolent list.

When we first laid eyes on this astonishingly lightweight beam of light we realized darkness was in deep trouble. Beautifully CNC’d, German built, ultra compact yet blasting out 550 lumens. The Piko mounts on a helmet or bar with a battery equality as micro. Yes, it’s a pricey three bills but true illumination — as any zen monk will tell you — is worth it. Special thanks to Brad at 3 Ring Cycles for the tip.

Math isn’t our subject but this is a win-win times ten. A beautiful, handmade, eco-delicious, bamboo bike falls into your hands and Africa is saved. Okay, not all of Africa, maybe just Ghana. But consider that there are no natural resources to speak of there except bamboo. Suddenly your dollars create a thriving accompany, self respect, food, shelter, a way out — and you wheel around in style. True bike philanthropy. Bamboosero frames from $695.

First an unkind word: we find foldable bikes both laughable and pathetic. You want a cool touring bike you can easily cram into a small case? Then you need S&S couplers. Visit their site, find a bike dealer they work with in your area, then watch the hacksaw go. In short order, you’ve got a bike that quickly breaks down into two pieces and reassembles with minimal work. Remember, folding bikes are like toy poodles — strictly for comedy. S&S couplers

Is there a gold brick standard in bibs? If not, we’re nominating the RSE on the brilliance of its synthetic chamois pad — which deserves the chamois of the year award. There are mesh vents, exhaust ports, closed cell damping zones and moisture acquisition tricks. Pull the pad out of any other high end bib you like and you’ll be underwhelmed. Your gluteus Maximus has been good this year so treat it right. Sugoi RSE bib $200

Maybe you missed that crazy three days at Interbike Las Vegas but we were camped at the DT Swiss booth because they design exceptional wheel sets. Their reputation is above reproach, they shred performance envelopes and their eye candy rips. It’s also important that several of their hoops are bomb proof — with no rider weight limits. Super light is cool until you’re dealing with product failure on the side of a mountain far from home. We no longer have time for those shenanigans. DT Swiss R 1900 wheelset $560 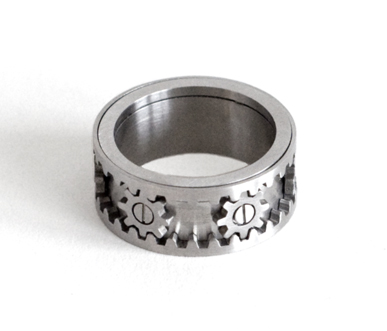 We happily quote:  “the Gear Ring is crafted from stainless steel and works like the inside of a watch. With six moveable gears built to precision, the ring allows you to turn the outer rims of the ring and watch machinery in motion all from your ring finger.” How cool is that, my two wheeled holiday brethren? You want a talk piece for your next group ride, this be it. Even our personal guru Bob Roll doesn’t have one yet. Kinect Gear Ring $165

Joe Parkin’s A Dog in a Hat

For those of us who read things besides bike catalogs, we offer the definitive and fascinating account of racing in Belgium in the 80’s. Funny, honest and an almost heart breaking tale of a naive but headstrong young man living his dream. Dog In The Hat $15

Okay, you’re drawing a blank and that’s understandable. LeQuatre is the lone Frenchman on the now retired Texan’s Radio Shack team and the creator of his own line of G4 Dimension cycling apparel. Think of him as a French George Hincapie. Once the only man in the peloton with his own signature line of umbrellas, Lequatre has a distinctive, oh-so-euro set of jerseys. Lequatre Poker jersey 130 euros

Electric bike from Stormer or Ebike

This isn’t a trend, it’s a transportation tsunami. Electric hybrid bikes are everywhere and most have that scary, half funded, half finished look. These two beauties get us exited about life post carbon. We tested the Stromer and Izip and came away impressed. Our secret plan? Give this to the wife and suddenly we’re doing long, fast rides again, together. Izip Urban Cruiser $1900

This is olive but hardly drab. It’s from a farm in Tuscany near Cinigiano, Italy. Certified organic, highest quality and Hampsten approved. Yes, that Hampsten, Andy, snowstorm on Gavia pass, only American to win the Giro. Not only are his retro bikes a thing of timeless rapture but now he brings us his favorite virgin. Christmas bonus: the label has a pretty girl on a red bike. Virgin Olive Oil $23 half liter