Greipel and gripes. German wins second stage while others complain.

Greipel and gripes. German wins second stage while others complain.

The G man with Stapleton.

Welcome to the Tour Down Under presented by HTC-Columbia.

The team may have re-ordered the sponsor position but nothing else has changed. If there’s a sprint finish, they’re going to win whether it’s Cavendish or Greipel. They could probably throw a geriatric Mario Cipollini on his old Saeco Cannondale and win.

Once again, it was Andre Greipel who won in front of Greg Henderson (Sky) and Robbie McEwen (Katyusha)  in his home away from home, Hahndorf. The German sprinter is the most popular rider in the heavily Deutschlandish town. Griepel may someday be elected mayor.

“Today we wanted to give a chance to the breakaway but the other teams wanted to chase them back,” said Greipel. “We have a good team here to maybe hold on to the leader’s jersey, but there’s two really hard stages coming up.”

The stage from Gawler to Hahndorf followed the usual procedures. Omega Pharma – Lotto teammates Mickael Delage and Olivier Kaisen and UniSA-Australian National Team rider David Kemp made the early and doomed escape. They had the crazy, champagne-soaked podium girls fantasy when the gap reached 11 minutes. But then the relentless pressure from HTC-Columbia and Team Sky yanked the leash back. 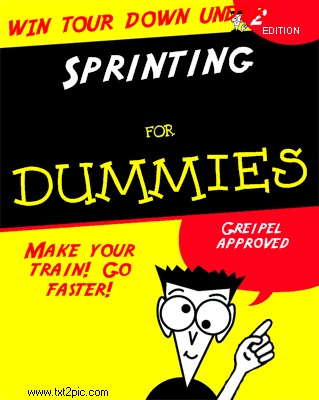 With 9k to the finish, the peloton came back together in one big, fast, happy family. From there it was textbook Columbia, the team that wrote the “Sprinting For Dummies Textbook” for the rest of the lycra universe. Doesn’t anybody read anymore? Greg Henderson and Robbie McEwen battled it out to take Behind Griepel honors and Henderson wasn’t happy about McEwen’s tactics.

“Chris Sutton couldn’t quite get in front, then McEwen came and bashed me off CJ’s wheel, so I’m not really sure what he was up to there. I might have to ask him later on,” said the Sky sprinter. Hey, why do you think they call him Rockin’ Robbie? The man is train-less and a superb bike handler so what did Henderson expect — Miss Manners?

There was also a bit of the old argy-bargy between BMC Racing Team’s Danilo Wyss and Graeme Brown (Rabobank). “I was directly on the wheel of Greipel when Graeme Brown came at me from the left and forced me off my perfect line,” said Wyss. “If that hadn’t happened, I certainly would have finished higher up.”

That’s what happens when one team dominates the sprints — the others bicker among themselves. Count yourself lucky boys, it could be worse. If it were Cavendish, you’d not only lose, he’d embarrass you with one of his trademark victory routines.