The Giro, aka, the grand tour with the sexiest girls, revealed this year’s “madrina” for the event.

In a charming and ironic twist, madrina means godmother in Italian but the Giro-specific defintion is “hot Italian babe eye candy for you to stare at.”

Last year it was the curvaceous and dramatic Yolanthe Cabau van Kasbergen but for 2011 Giro boss Angelo Zomegnan voted for the mysterious allure of actress Cristiana Capotondi. We think you’d agree there’s nothing godmother about her. 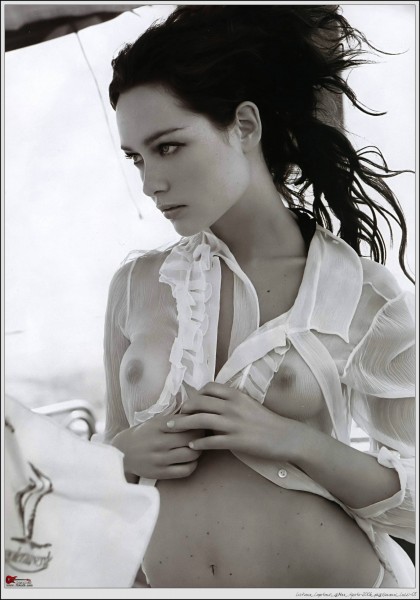 Welcome to the Giro.

Her first gig was a commercial for Maxibon Motta” ice cream. Ahh, gelato and bicycles, such a natural. Then she went on to fame and euros by starring in the 2006 movie “Notte prima degli esami” (Night Before the Exams).

Does she ride a bike, has she ever seen a bike race, does she have a poster of Ivan Basso in her bedroom, does anyone really care?

Ms. Capotondi will be on display at the Giro start in Torino May 7, at the finish in Milan on May 29, and will be intimately involved in all related activities.

Which most likely means standing around looking lucscious while old Italian men try to keep their tembling paws off her.

Giro impresario Zomegnan is the king of specatacle in cycling and once again he has delivered the sexy goods. You have to repesct the many talents of this man: his podium girls rule the grand tours and he plots UCI revolution with Jonathan Vaughters in his spare time while knocking back a few glasses of high quality Barolo.

He’s a renaissance man and cycling needs him as badly as it needs Patrick McQuaid to disappear. P.S. Angelo, time to get cracking on madrina 2012 and with your visionary out of the box thinking, maybe it’s time for the Reef girls.