Garmin finally got their big classics win. It was certainly a big surprise.

On the infamous Carrefour de L’Arbre cobblestones, Johan Van Summeren powered away from a small breakaway and took a solo victory ahead of Fabian Cancellara (Leopard Trek) and Maarten Tjallingii (Rabobank). A stunning Paris-Roubaix win for a classics specialist who has spent his career riding for others.

“When I was in the lead group, I knew I had a chance to win. To win ahead of Cancellara – he is such a great rider,” said Van Summeren. “I had wonderful legs, it was a great day.” A dusty chapeau, my friend, enjoy the youtube salute.

He triumphed over the odds, avoided the crashes, outlasted a powerful Cancellara and won the queen of the classics. Along with Tjallingi, it was a day for the little guys, a day when the biggest stars either crashed hard or marked Superman too much.

The first star to fall was none other than Quick Step’s Tom Boonen. A chain problem in the Arenberg Forest led to a shocking scene: a helpless Boonen standing with his bike in the middle of the road as the entire peloton ripped past. He looked like a tourist taking in the show. His chances vanished in that instant but he fought on until he was knocked out by his own water bottle flying out and wedging between his back wheel and frame. Crash, history.

The weather was sunny and perfect, the speeds high and the dusty cobblestones seemed to cause plenty of problems. The falling down kind. Sylvain Chavanel went down hard and needed a ten count before he could get to his feet. A “cheese grater” of a crash, he called it. The Frenchman would finish a battered 38th place but showed his toughness.

Filippo Pozzato, already under pressure and hammered by criticism from his own Katusha squad, had a miserable day, too. First, he crashed then a puncture — not his wheel, but the Katusha team car! The angry folks at the Global Russian Cycling Project couldn’t get him a spare bike, so he took the broom wagon. The Italian media will dine on roast Pozzato for the next few weeks. We actually feel sorry for the guy. 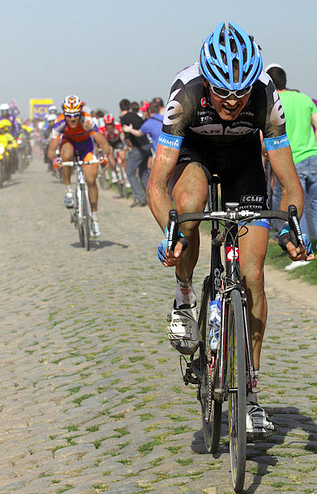 George Hincapie, no stranger to bad luck at Paris-Roubaix, has his usual ill-timed puncture and assorted mishaps. A 42nd place was not what he dreamed about when he was training hard in January. Sentimental favorites are great but sentiment doesn’t go far in the Hell of the North.

The remaining strongmen gradually worked their way to the front. Cancellara rode with smooth power, effortless, never caught up in the chaos. Thor Hushovd made sure he was locked on the Swiss champion’s read wheel. Alessandro Ballan (BMC) might be back in the Mantova doping story but it sure wasn’t affecting his confidence or power output.

At sector number 8, Pont-Thibaut à Ennevelin, Cancellara did his superman trick, accelerating away and only Hushovd and Ballan were able to stay with him. On pure force alone, it looked like the kind of move that tracks down a break, kills it dead and snatches the victory.

Still the race was further up the road with Van Summeren, Lars Bak (HTC-Highroad), Grégory Rast (Radio Shack) and Maarten Tjallingii. They weren’t slowing down and suddenly the storyline was changing. The little guys had a minute lead and were just 15 kilometers from the velodrome and glory and that big rock trophy.

Time was running out and Fabian Cancellara was angry, disgusted, tired of being marked by everyone on a bike in Northern France, all the pressure on his shoulders, nobody willing to do a lousy turn on the front. Superman reduced to begging for help at the Garmin team car. Sorry, not interested. So he went hard again and blew Hushovd and Ballan off his wheel. It was a hammer blow and he launched into full time trial mode sweeping up the leftovers of the early breakaway.

Unfortunately for superman, Van Summeren had done the exact same thing and was flying up the road, with only Tjallingii willing and able to chase. The tall, skinny Belgian entered the velodrome alone, arms high in the air, taking the biggest win of his career in the biggest one day race in the world.

Cancellara had beaten everyone except a domestique from Garmin-Cervelo who rode the last few k on a flat tire. “I had a puncture with 5km to go. I knew it was too late to change the wheel, so I had to take it a little easy on the velodrome,” Van Summeren said. “I know how to ride on a flat because sometimes I forget to bring a tire on training rides.”

It was actually a double victory for Van Summeren because he proposed to his girlfriend on the velodrome infield. “Some people give a ring, I give a rock,” said Van Summeren. That’s going to be a tough one to wear on a finger. Perhaps this makes runner-up Cancellara the best man.

Last week in the aftermath of Flanders, Jonathan Vaughters said nobody on his team had brought their A game. In the Hell of the North, Van Summeren was an A+.