Sports can be so sexy.

Reason #7391 why we love the French: Their national sports minister ins’t some rumpled, over-weight functionary who’s been on the cocktail circuit too long. Or related in some way to UCI president Patrick McQuaid.

No, the French minister for sport is Chantal Jouanno who is beautiful and stylish and perhaps once a mistress for President Sarkozy— because being forced to listen to old Carla Bruni records does get tiring. Sarkozy is not only a big cyclist and race fan, he know a hot minister when he sees on. 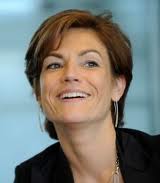 Chantal has a black belt in karate, she was champion in her age group twelve times — which means that once she makes a pronouncement about sports, she can back it up.

This week the sassy Chantal said she believed Lance Armstrong took performance enhancing drugs and that he should admit the dirty deed. Lance, do not challenge her to an arm wrestling match or something, she’ll kill ya.

In any case, she also slips into the black lingerie for some sports talk in Le Playboy. Because this is France and anyway everybody likes a good brassiere.