Police claim Astana had illegal transfusion kit during tour. 7 finger prints for 9 riders. Who got gypped?

Police claim Astana had illegal transfusion kit during tour. 7 finger prints for 9 riders. Who got gypped?

Seven different fingerprints, nine riders. WHo was left out?

French police claim they have in their gallic mitts illegal syringes — what they call transfusion equipment– taken from Team Astana during the 2009 Tour De France. This medical stuff is banned by the World Anti-Doping Agency.

Twisted Spoke will not jump into the conspiracy fray. Too early in the case and besides it’s the holidays, a short moratorium on pokey needle stories. However, the intriguing tidbit in this story is the presence of “seven unique DNA fingerprints.”

Now, this could be no story at all. The French doping agency (AFLD) hates the UCI and vice versa. The French newspaper Le Monde, in which the story ran,  has never been a big Armstrong fan. This is probably just huffing and puffing without consequence — a specialty of the French and Italian legal system.

But let’s just suppose for a moment that those seven syringes were illegal and the goodies held within were not just vitamins. What does this mean? Well, the implication is pretty staggering. 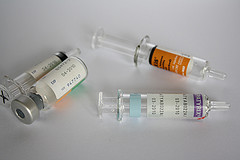 Who missed the secret sauce?

It means two riders on Astana tour team got gypped. Right now, two guys on Alberto Contador’s winning Tour de France squad are wondering why they didn’t merit the secret sauce. They’re like the final two kids in line at the ice cream truck on a 100 degree summer day who find out the last frosty rocket pop was just sold.

In other words, they feel cheated, shafted, the black sheep of Astana. Oh, sure, they’re thinking — Armstrong and Contador and Popovych get the good stuff. What about us? No wonder the tour was so exhausting– we were riding without the jet fuel.

Now, knowing the French legal system, this story is just hot air than will slowly dissipate over the next month and nobody will ever hear of it again. But just in case, we think those seven DNA fingerprints could be pretty revealing. Who were the two low men on the Astana totem pole?