After a period of relative quiet on the carbon road wheel-set, Mavic announced a major jump forward with their new Cosmic Carbone 40C ($2750).

Mavic accomplished that by making what looks like an all carbon wheel set but isn’t. There’s an extruded aluminum rim — really, an insert — that’s bonded to a foam core, then that rim is wrapped in the full carbon treatment. The Mavic vid on the development and manufacture is right below.

Mavic has produced a 1545 gram wheel-set that supposedly brakes as well as the best carbon clinchers and twice as well in wet conditions — with stopping distances even shorter than Mavic alloy rims.

They claim stiffness is 10 percent greater than the top rivals and almost 50 percent better laterally in terms of the whole wheel. With their Power Link technology, the rear wheel delivers maximum power to the ground while not causing a flex at the top of the rim. Adios brake rub.

A new resin called Tg Max mixes two resins with different temperature ratings. The idea being the combination delivers better heat resistance on the brake track without the grabby brake feel associated with so many carbon wheel-sets.

The spokes screw directly into a threaded aluminum insert inside of the innermost section of the carbon rim. The aluminum insert isn’t continuous throughout the diameter of the rim but is rather a small machined element designated for each individual spoke.

The rim of the aluminum tire bed is left with no drillings to boost structural integrity and to help eliminate heat to the tube caused by the pulsing of the brake pads you might encounter in a drilled rim. 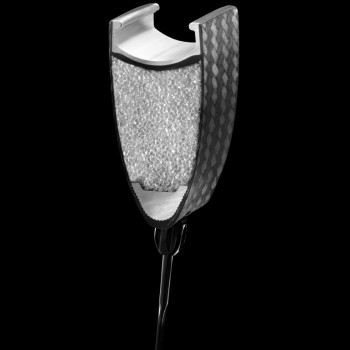 The lack of drilling preserves the integrity of the rim bed and ensures a truly consistent braking surface for years to come with no digits or pitting like you often see on older well-used rims. This provides what Mavic calls a”perfect brake track geometry.”

The aluminum insert also maintains the structural integrity when dealing with external and internal pressures. You avoid the need for additional overweight and oversized carbon sidewalls and hooks.

The isotropic properties of the aluminum provide plenty of high impact resistance from bumps in the road. Because the insert is aluminum, there’s no need to worry about harming the hook of the rim with a tire lever. All good stuff that speaks to longevity — which is always a good thing when forking over a few grand.

I had an opportunity to get the full Mavic show and media test ride at the recent Sea Otter Classic in Monterey, California. The ride was 45 miles of rolling to hilly terrain with a few flat spots along the coastline in mid 80 degree heat.

The downhill was a good initial test but I would have liked to see the wheels perform on a more demanding descent. (Mavic did their own development testing on the famed Mont Ventoux.) Nevertheless, I gave the wheels a good thrashing. The effortlessness and speed with which the 40 C’s rolled was something that stuck in my head the entire ride.

A combination of the foam core and how the paws in the rear hub are greased both served to deaden all the hollow sounds you get with nearly any other carbon wheel on the market. These sounds are most commonly caused by shifting and general bumps in the road. I’ve gotten used to the annoying sounds but when riding the Mavic 40C, you get a noticeably quieter ride.

In fact, the wheels provided a very similar ride to my Ksyrium Elites in terms of comfort and weight. Having had three sets of them, those ride characteristics are pretty baked into my mind.

On little sharp grades both in and out of the saddle, the wheels felt launch-pad stiff. Like your legs gained wattage. You can find lighter carbon wheels but at 1545 grams, the Mavics felt just fine even when I was going hard on a long 12 minute climb.

At the end of the major descent for the day I saw a chance to test the stiffness in a sprint and hammered it with pretty much everything I could give it. Takeaway: excellent.

Having ridden my own bike, I could test the Mavic 40C through that lens and get a sense of how these wheels actually handled — a new bike just confuses the issues. Big point here: the brake pads worked great, noticeably better compared to other carbon wheels.

Wheels and pads under long, sustained braking loads can heat up to just around 400 degrees fahrenheit. Melting carbon is a dangerous thing. In my test ride, heat fade was never an issue when the brakes were applied for longer durations for general speed reduction. Bottom line: Mavic has delivered the goods on braking. 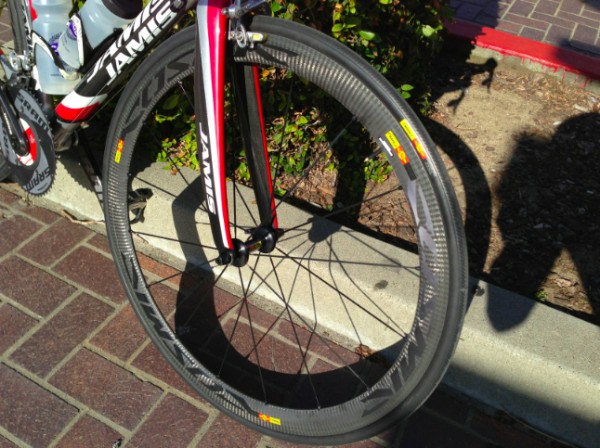 At one point, we all hit an abrupt traffic stop light coming off a fast decent. That’s the kind of unexpected surprise that spells trouble but I was relieved to discover the Mavic 40C delivered the instant stopping power. The wheels are said to have twice the stopping power of other carbon competitors in the rain. (Unfortunately there wasn’t a drop of rain for us to test that assertion.)

The 40mm profile is a great depth for an all around type of wheel. In fact, Mavic pitches the 40C as an everyday, all conditions wheel set.  It is hard to prove aerodynamics out on the road but I would bet a comparable Zipp 303 would return slightly better numbers. I don’t have any wind tunnel data on that comparison.

Mavic have four more rims coming out in this calendar year. With all this money being sunk into reduced heat on the brake track, I hope they have a disc brake option coming down the road as well.

There are a lot of questions surrounding their stance on not going as wide as some of their competitor rim beds. Tire contact and improved aerodynamics are big selling points for companies like Zipp. However, Mavic maintains a thinner rim bed and believes when pairing the rim with one of their tires, it’s the best setup to provide the best grip.

The Mavic 40C is an exciting entry in the crowded carbon wheel market. They’ve put three years of development to great use with a product that takes a distinctive approach to solving the braking issue in terms of performance, overheating and safety. I hope to give the Mavics an in-depth test and review in the next month.