Hi, if you first the favorites part one, here’s a hand dandy link. This is the second gallery of the things that turned out best when a new camera is given to an untrained hack. I like this shot because it’s minutes before the start of the first stage and Levi gets his special moment as last year’s champion. There’s some theater and expectation to it that fits the moment. 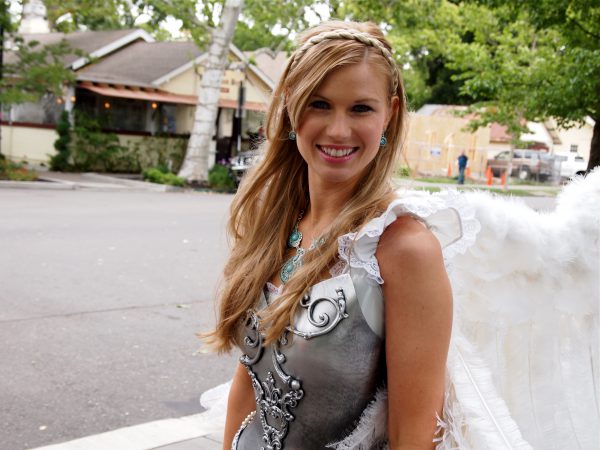 Now first off, there are no bad pictures of Jana Ireton, the angel of the echelon. This was at the start of stage two in Davis. Jana is actually quite charming and I did a funny interview with her — she was willing to play along with my joke questions. That interview is right about here. 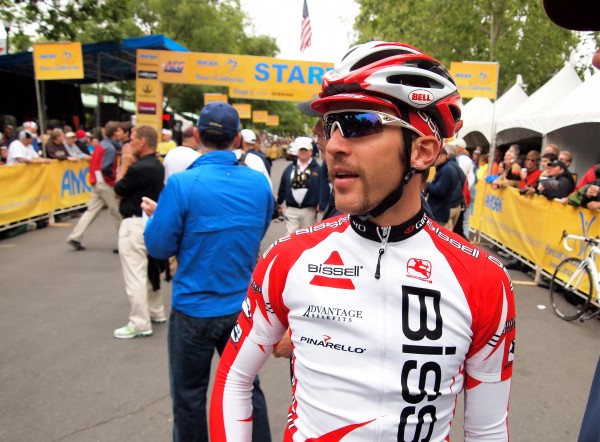 I’m way better with the foreign teams and rider names but the Tour of California was my first chance to meet some pretty cool and talented domestic riders. Identical twins Andy & Jacques Maynes fit in that category. For a new cycling journalist, they’re a great interview — friendly and willing to chat for more than one or two questions. I was pulling for both these guys all week. Their fans are have a terrific name — the Mayniacs. 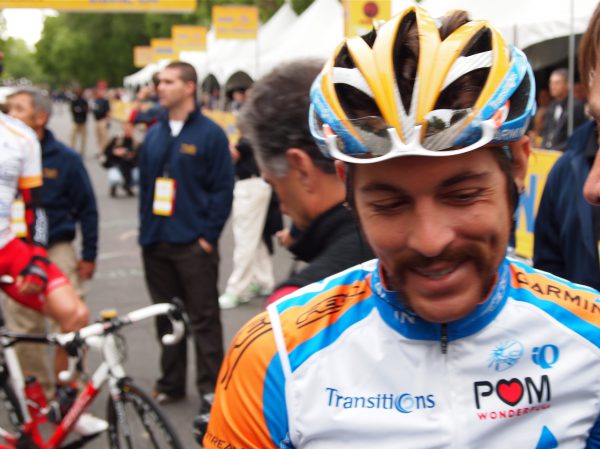 Garmin’s Steve Cozza lives in Petaluma, California just up the road 40 minutes for me. So I root for him for geographical reasons if nothing else. He always seems to be in a good mood so this photo seems to capture that. A hard working guy who lays it all out for the team. 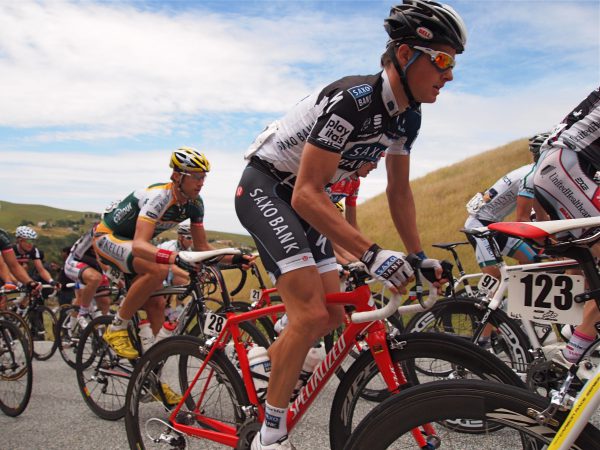 One of the numbskull things I do is just hold the shutter button down on sequential fire and see what I get. In this case, something. 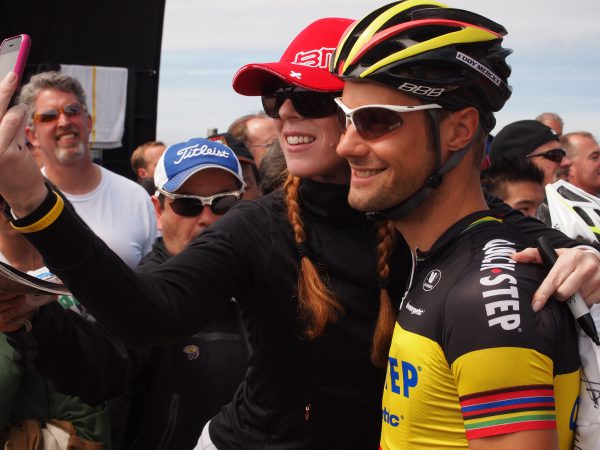 I don’t know all that much about Tom Boonen’s personality. Is he a nice guy, a jerk, down-to-earth, an egomaniac? I do know that he gets a big round of applause whenever he’s introduced at the sign in. He also seems to enjoy himself and has plenty of smiles for the fans. 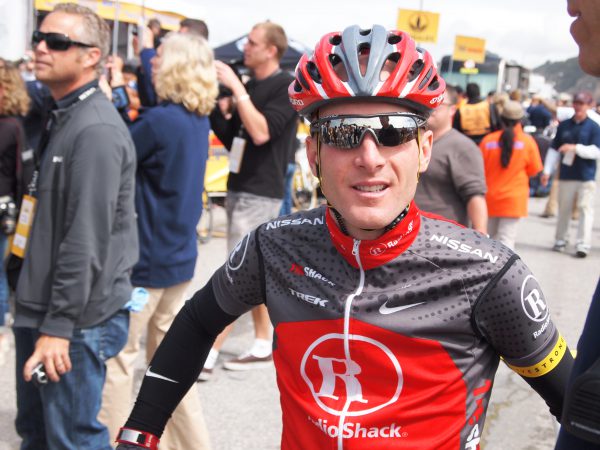 Levi always had his super-serious game face on for the Tour of California. This was a quick grab before the race that day. I was shocked how short and skinny he is. If you are ever in a bar fight, you don’t want Levi backing you up. Cancellara and Jens Voigt, yeah, those guys are good but Levi ain’t gonna knock anyone out unless he’s on a bike. 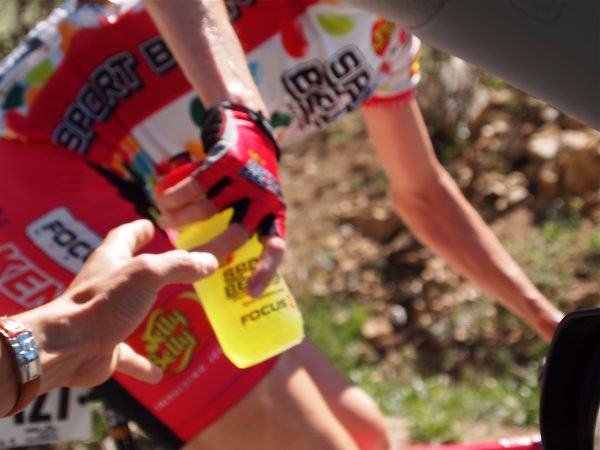 It’s such an elemental image in the sport and happens hundreds of times in a race. I just like the out-stretched hand like Jesus just got you that gatorade so needed to live for another ten miles. 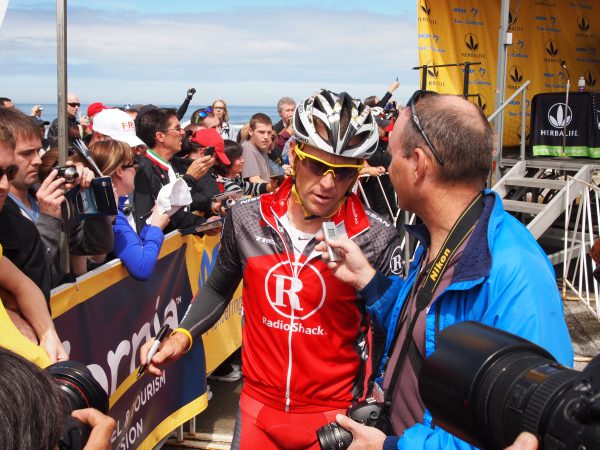 Cycling photographers all tell you how hard it is to get a good shot of Lance. They’ve got plenty of his backside, him turning away or him mostly hidden in a scrum of fans and media. He arrives at the last second and leaves fast. Well, it’s not magazine cover worth but I’m officially in the club now: I got a good shot of Lance. This is photographic evidence for my 14 year old son that yes, Lance and I were this damn close to each other. 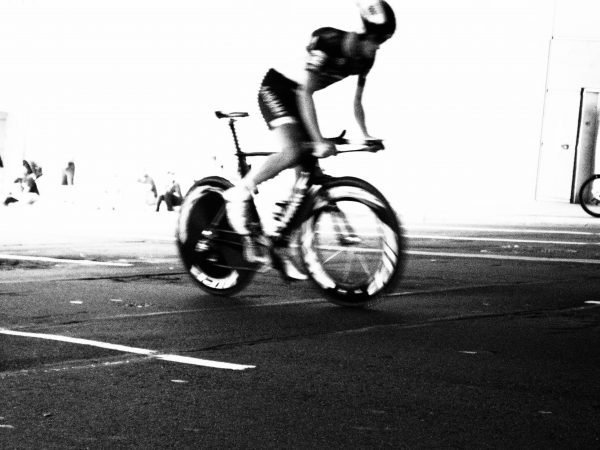 My other photography trick besides blasting away on sequential fire is too just use the art settings on the camera. I figure I might get lucky and end up with something nobody else has. This might be one of those shots. This is the LA time trial and the rider is actually entering a short tunnel from bright sunshine. I had it one grainy high contrast and thought it was pretty cool, somehow, someway. 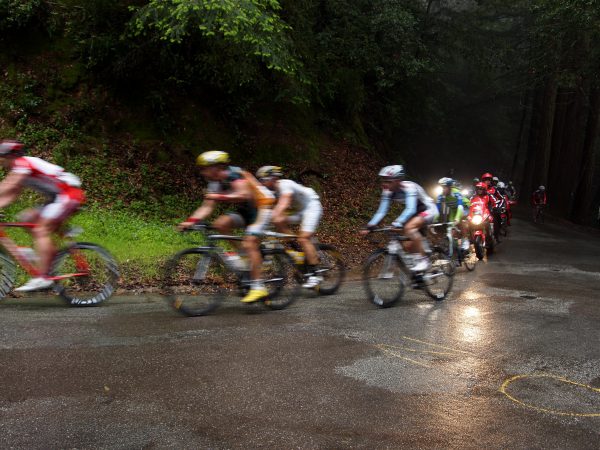 Out of focus? Damn right it is, but then, that’s art. Actually, I was still getting the sport setting right on the camera so everything on day two was out of focus although I prefer to say I was after that artistic painterly effect. You make the call on this one.