Favorite shots from Tour of California.

Favorite shots from Tour of California.

The thing to know going in: I’m not much of a photographer. I consider myself a creative person but when it comes down it it, I’m fairly useless about framing a great shot. On the plus side, I had a brand new camera and back on the down side, it took me several days to figure the basic functions out. With all that rigamarole said, there are some of my favorite pics from the 2010 tour.

I believe this was the day from San Jose to Visalia. The first climb of the day. The background is clear of spectators because the Darrel Parks, the photographer for Pez Cycling news had asked everyone to move right or left. 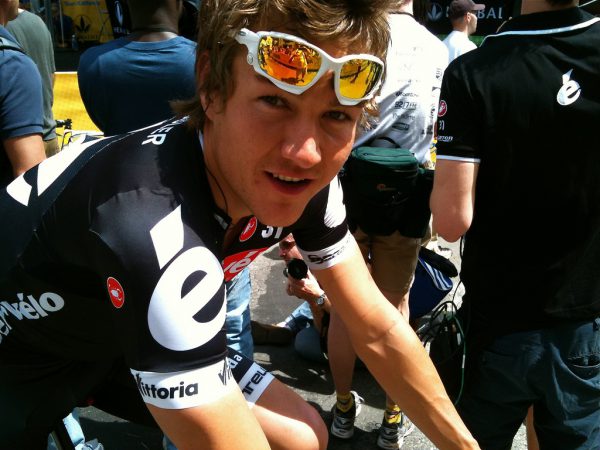 This was at sign-in. I was trying to get a shot of him and right as he wheeled his bike out of the media scrum he just happened to turn and see him shooting.

Haussler has a strangely haunting face that’s almost asian and feminine. There’s also a lost little boy quality to him, a fragility that’s unexpected in a guy who’s won a stage in the Tour de France.

A day or two later he’d crash out of the tour in the same pile up that claimed Lance Armstrong. A few days later, back home in Germany, he’d get nailed with a drunk driving charge. 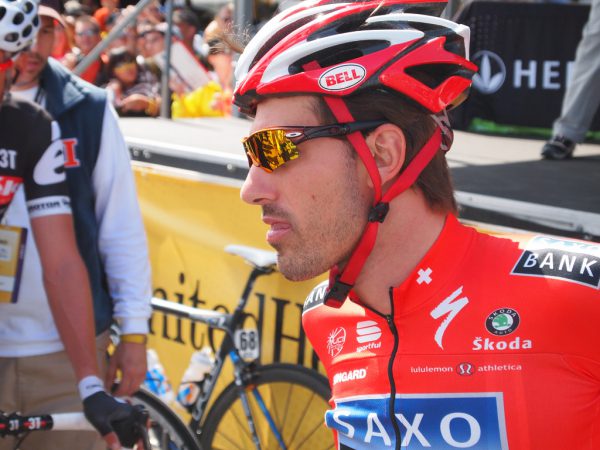 Cancellara is one of my heroes and to be in the sign-in area so close to him was pretty cool. He always looks relaxed like he’s done a trillion races and there’s nothing you could do to make him nervous. 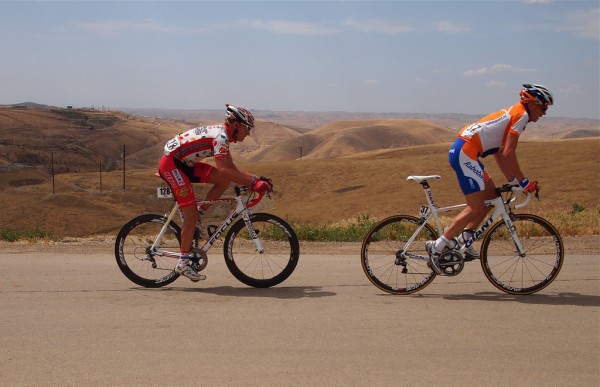 This is a flat sections of the gradual climb up towards the outskirts of Bakersfield. Just below are miles and miles of oil derricks, pumping equipment of every kind and plenty of evidence that this is a town built by an oil company. Nevertheless, the rolling brown hills made for a beautiful bare landscape. 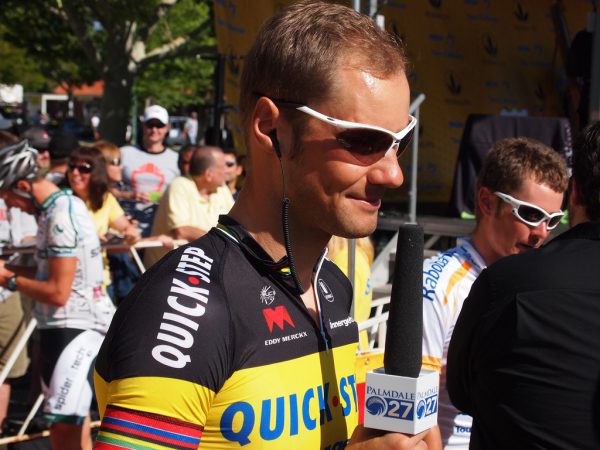 One of the first shocks I got when I actually saw bike racers up close is how small they are. Levi Leipheimer, Dave Zabriskie, Mark Cavendish, they’re  little guys. Then there’s guys like Jens Voigt, Fabian Cancellara and Tom Boonen, guys that can ride the cobbles and muscle a bike over rough terrain. This was my best candid of Tornado Tom. 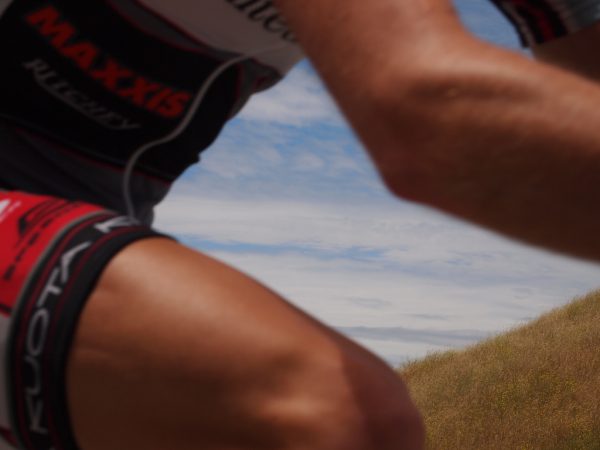 This is one of those happy accidents. I was crouched down low, the whole peloton going up hill and just a foot from my camera. I had the thing set for sequential firing so I just held the shutter down as they went by. A luck and cool framing. 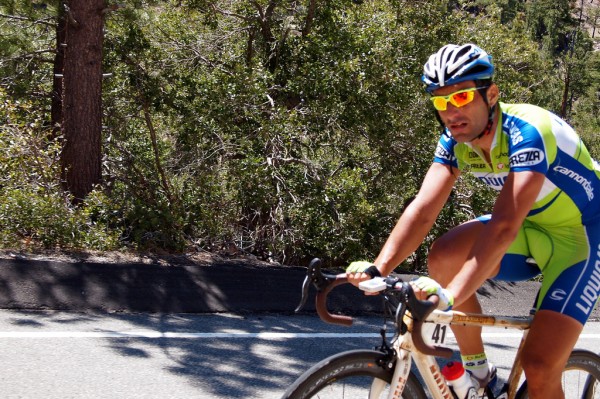 Chicchi from the car.

I shot a lot of stuff just sticking my camera out the window of the Media Car and hoping for something interesting. In this case, I managed to pull off a nice shot of the Sheriff himself, Francesco Checchi as we whipped past on his left. 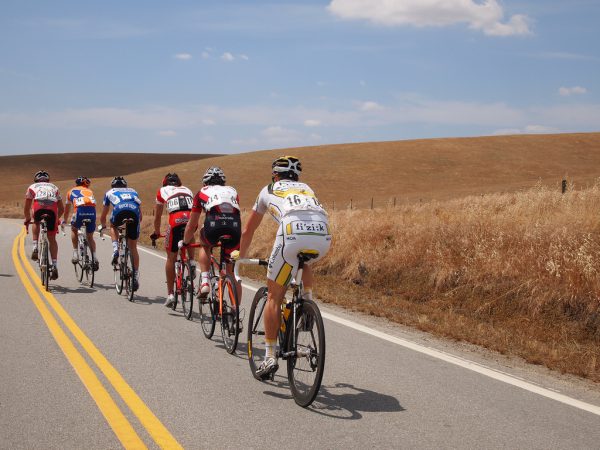 This was probably the Bakersfield breakaway. I just like the simplicity of the fame and the colors. Sometimes a break looks just like a casual spin with your buddies and you forget there’s over a hundred guys behind eating their time gap. 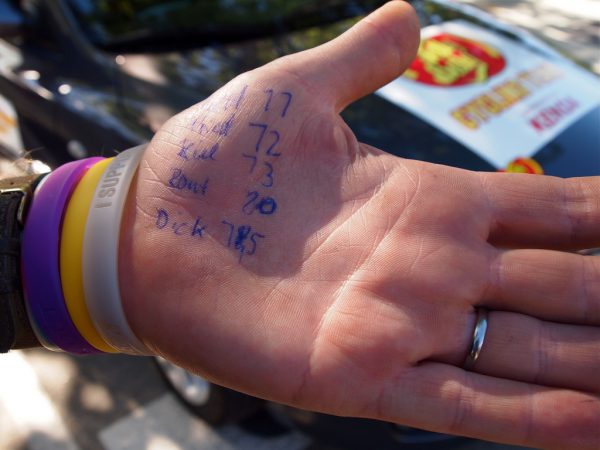 This is the hand of Ralf Medloff, the mechanic for the Jelly Belly Squad. He’d written the dimensions for each rider so he could avoid carrying all nine spare bikes. He’d pared it to five bikes and had all the adjustments he’d have to make right where he needed to see them. 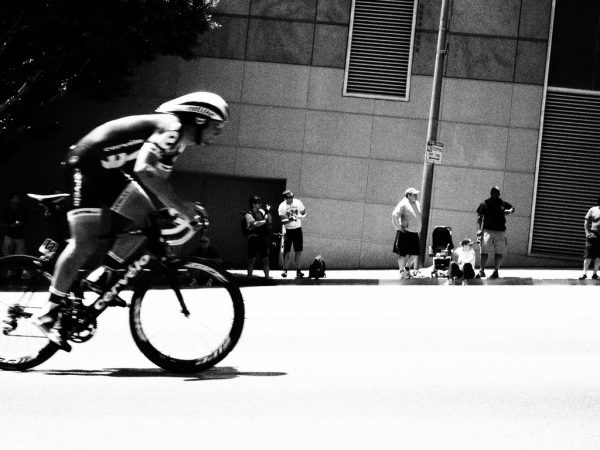 This is a shot where I was playing around with the high contrast setting during the Los Angeles stage 7 time trial. I kinda liked the graphics of it despite the lack of focus.  What’s interesting to note is the fans aren’t looking at him, they’re looking for another rider on the course coming back down the route. 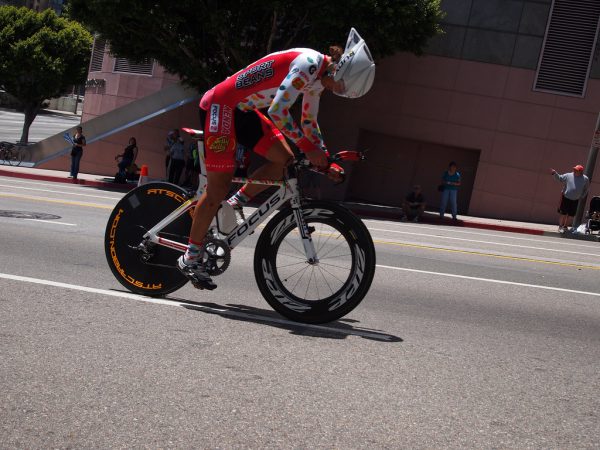 Another TT shot and what I thought was kinda cool is the position of his head, looking down like he’s checking gears. I was also trying out some of the art filters in the camera and this might have one that boosted colors. Hard to tell when you start with a loud Jelly Bean jersey. 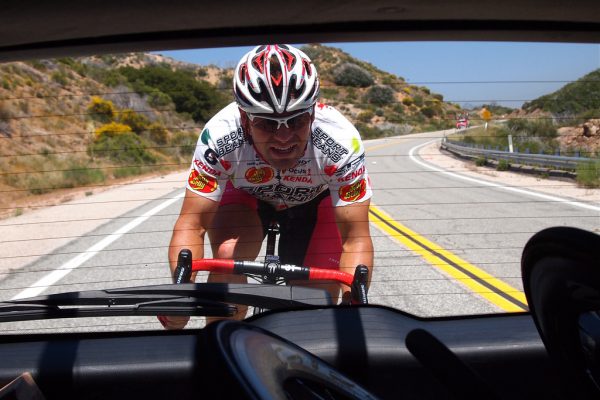 This was definitely one of my favorites. The Jelly Belly team became my number one coolest domestic team and this was my day in the Team car.

Their sprinter Mike Friedman was trying to catch back on and was drafting the car bombing downhill at 60 mph. He made it back but at the end of the day was disqualified for excessive drafting. Oh well.