Think what the man would do with two good hands?

Garmin-Transitions Tyler Farrar decided to give his fractured hand a work-out today and pulled hard on the bars. He didn’t win the stage but second place was quite an accomplishment, considering the injury he’s fighting through.

I saw Farrar right after he crossed the line, besieged almost immediately by the French television media. He speaks French surprisingly well and pronounced himself “tres content” to have taken second to winner Mark Cavendish — who will probably not cry this time around. 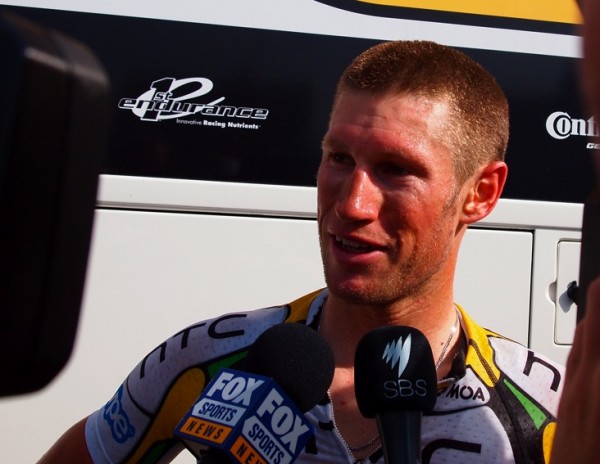 Renshaw. He worked up a sweat.

When you can accomplish something with one hand tied behind your back, it’s a sign of mastery. We’ll see what Farrar can do when he gets he next chance but tomorrow it’s the Alps. Time to settle into the grupetto and give the fracture some time to heal more.

Cavendish’s lead-out man Mark Renshaw told reporters at the team bus that he was ready for the slow group — “I bought my ticket already.”

At the post race press conference Cavendish, referring to his usual perfect leadout train, said “I’m the luckiest guy in the world.” Tyler Farrar could use some luck now — the fast healing variety.