Evans wins Oppy. Who the hell is Hupert Opperman?

Home/Uncategorized/Evans wins Oppy. Who the hell is Hupert Opperman?

Evans wins Oppy. Who the hell is Hupert Opperman?

Now, you’re wondering who is this guy Oppy?

A quick dive into wikipedia and you find out that Hupert Opperman was as tough as they come, a cyclist of prodigious will and strength. His story reads like an daring adventure novel with Oppy as the hard-nosed hero who takes on the closed ranks of European bike racing in the late 20’s and 30’s.

It’s also reminder that not-so-long ago life was rougher and demanded both fists up at all times.

He had an immediate talent for the bike, winning the Australian road title four times by the time he was just 25.

By 1927 he was ready to tackle the Tour de France. In that particular year, the event was contested more as a team event. The French squads had 10 riders and the Australians only four. Despite the enormous handicap, he still finished 18th. 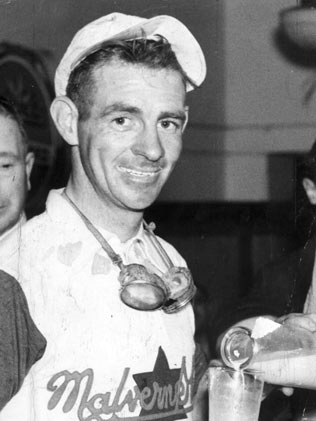 He later won the 1166 kilometer Paris-Brest-Paris in 1931 with a a record time of 49h 23m despite lashing rain and wind. He was a harder man than Bernard Hinault, a sort of pre-Badger.

In 1928 Opperman won the Bol d’Or 24-hour classic on a borrowed bike with heavy mudguards and wheels and upturned handlebars. Opperman rode for 17 hours before even dismounting once. Even after a puncture in the 23rd hour he still won by thirty minutes.

Having won the race, he was persuaded to smash the time record for riding 1000 kilometers. He simply climbed back on the saddle and rode another 1 hour, 19 minutes and the record was his.

During World War II he served in the Royal Australian Air Force and later went into politics, eventually becoming a cabinet minister. He rode his bike until he was 90 and his wife forced him to stop out of fear for his safety.

Twisted Spoke would venture to say that as hard as Cadel Evans worked to win the Tour de France, he isn’t half the bad-ass as Hubert Opperman. Knowing the man a bit more now, an Oppy medal around your neck is quite an honor.