Home/Humor/Evans starts Tour Down Under with flash cards.

The Down Under Social Club.

World Champion Cadel Evans is using his home tour, the Tour Down Under, not for training but for social networking.

I’m just happy to be here to get my season started and meeting my new team-mates is probably the most important thing for me. “

That’s where the name tags comes in. Despite his high profile win in the wold Championships in Mendrisio Switzerland, some of the younger riders simply don’t know who Evans is — and vice verse.

Evans has heard the name George Hincapie– something to do with Paris- Roubaix, and had a vague recollection of Alessandro Ballan, him being the previous world champion, but still Evan’s memory is rusty.

“I didn’t know any of them,” said Evans. “For me, not in any way to dishonor the race at all, but it’s really a great opportunity for us just to get to know each other. I’m just happy to be here with them, get to know them and help them get some results.” 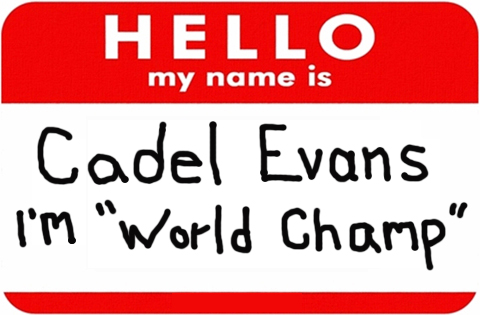 Not to worry though. Evans has a few conversational ice breakers ready to go for those BMC strangers.  Like, so, do you like dogs? Mine’s named Molly. Oh, you like heavy metal? My wife’s a concert pianist. What, you’ve had a slow wheel change in a big race? Lemme tell you about slow wheel changes. If you were an animal, and it couldn’t be a kangaroo, what animal would you be?

Evan’s goal for the six stage Tour Down Under is to memorize the entire BMC roster, including birthplace, favorite color and VO2 max. According to his coach, Evans has been working out an hour a day with flash-cards.

“Work together well as a team, that’s my main goal,” said Evans. For me it’s just functioning well as a unit and to come away from that knowing each other better will be my main thing.

You go, Cadel. The man in the rainbow has all the colors down.