Evans crushes rivals in Tirreno-Adriatico. This is mellow?

Evans crushes rivals in Tirreno-Adriatico. This is mellow?

So much for the relaxed, slow build up to his season.

Mad dog Cadel Evans put the hammer down in Tirreno-Adriatico and showed Basso, Scarponi and Visconti who plans to win the overall. If this is Evan’s idea of a more mellow start, we better watch out.

On a brutal uphill finish it was Evans who out-sprinted Scarponi for an impressive win and a clear statement of intentions. He slumped over the bars at the finish, exhausted but triumphant. He now has twelve seconds on Scarponi.

“It was one thing to take the jersey yesterday but to win a stage in the jersey today is really great,” Evans said after the finish. “My first plan today was not to lose any seconds but of course if there’s an opportunity to gain seconds that’s always an advantage ahead of tomorrow.”

There was a long breakaway with Borut Bozic (Vacansoleil-DCM) and Bert Grabsch (HTC-Highroad) but plenty of teams were committed to keeping the pace high. The chase ended with 20 kilometers to go and then it was Evan’s BMC team running the show.

Former world champion Alessandro Ballan and big George Hincapie controlled affairs until the final 2k when all Hell broke away. Scarponi, Cunego and Basso all attacked but it was Evans who waited patiently until the last 300 meters to destroy his rivals. 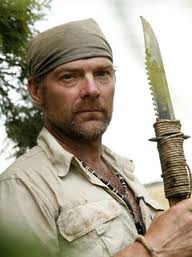 There you have it — the laid-back, takin’ it easy Cadel Evans. Which makes him a meaner badass than Bear Grylls and Survivorman Les Stroud put together.

Next up, a race against the clock with time running out for Evan’s rivals. “It’s only a 10km time trial, but it’s always better to have a bigger advantage than a lesser advantage,” said Evans.

This is all part of the new Evans, ever since he won the World Championship road race in 2009. Even when he’s relaxed and starting the season slow, he’s fast and agressive.