Forgive me father for I am a media hungry priest.

As God is my witness Don Marco Pozza must be a busy man. His latest venture is setting up disgraced Italian cyclist Filippo Pozzato with volunteer work in Kenya. Pozzato said he had to get out of Italy because he was so angry he was kicked off the Olympic team thanks to his relationship with banned dope doctor Michele Ferrari.

There’s no exact word on what volunteer work Don Marco Pozza found for his disciple. Is he building schools, curing yellow fever or malaria, teaching little Kenyan boys and girls how to roll pasta dough? He had time to do some altitude training but what about improving water sanitation?

Hard to say what Master P was up to but Pozza made sure it scored high on the public relations meter — as in “Look, here is my poor Filippo, my wayward sheep, working among the poor and starving in Africa and you wish to punish him simply for stopping by Dr. Ferrari’s house for an aperitif and training plans?” 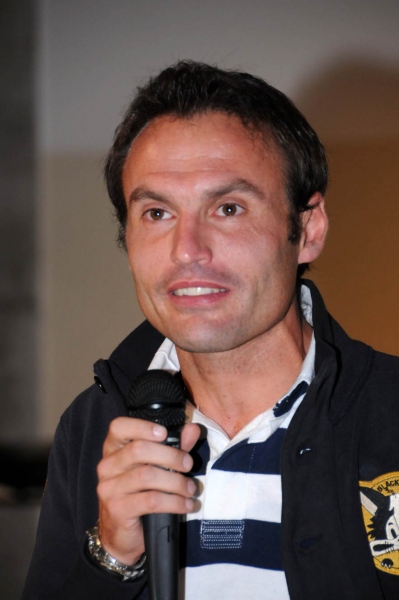 A flock of wayward cyclists.

If your memory still works, you’ll recall that Don Marco Pozza is the same priest who supposedly convinced doper Danilo di Luca to come to church and confess in front of 500 school children. Many of the kids wept openly as they listened to Di Luca’s tale of woe and even some of the media choked up. Nice work by Pozza. Later the priest acted as Di Luca’s advisor when he signed his contract with Katusha.

Perhaps in his own disastrous time at Katusha, Filippo had the opportunity to met Pozza, the patron saint of fallen cyclists. The roving priest seems to have an ability to stage a spectacle designed to accelerate forgiveness of doping sins and transgressions.

We’ll admit it’s just our cynical take here at Twisted Spoke, but both Di Luca and Pozzato have used the same absolution strategy. Perhaps in Italy they don’t have PR people but instead rely on priests to fulfill the role, giving confessions an extra measure of believability and contrition. In Italy, the cross works wonders.

We don’t speak or read Italian but just watching the video interviews of the 32 year old Don Marco Pozza, he looks pretty slick, high energy and media savvy. In fact, he could pass for Di Luca’s brother — same sexy hair, identical grin. He’s one of those types with a long list of claimed talents — writer, journalist, priest, entrepreneur and events planner. He can save your soul on Sunday and plead your case with the Italian Olympic Committee on Monday.

We’ll see how Pozzato’s Ferrari story — and his Kenyan philanthropy — go down with the Italian Olympic Committee’s anti-doping tribunal on September 11. Perhaps when his personal priest explains how Pozzato taught the Kenyan children to read, they will skip the one year suspension. At least that’s what Master P is praying for.