Raquel is one hot cave girl.

We’re not saying Mark Cavendish is in danger. We’re only saying watch out and stick close together because crazy things have happened here.

Boy Racer and his Columbia HTC team are training in the Canaries, on the Spanish island of Lanzarote. This is the exact location where in 1966 they filmed the fantasy adventure One Million Years B.C. That last part evidently standing for Before Columbia.

The original theatrical poster invites us to  “Travel back through time and space to the edge of man’s beginnings…discover a savage world whose only law was lust!” Savage as in vicious dinosaurs ripping cave men apart like deli hot wings. Doesn’t matter how fast you can sprint on a bike if there’s a tyrannosaurus rex behind you.

And there was the lust. Because the dish in question was none other than 60’s sex bomb Raquel Welch. It may be that even 44 years later there’s some lust left over, a tribe of sex-hungry cave girls still hiding out that would distract the training regime of the most hardened bike rider. Did I really say hardened?

One Million Years B.C. concerns the story of the Rock and Shell tribe back in the pre-historic day battling the aforementioned dinos and each other. At the thrilling climax, a huge volcano erupts, basically destroying the planet, leaving only the sexy Raquel cave girl and one lucky man to rebuild the human race.

In actual fact, the island of Lanzarote is home to the largest submerged volcanic tunnel in the world. Hey, you never know when one of these babies can blow and team Columbia would be well-advised to have helicopters ready. Scorching hot lava will melt down a titanium or carbon fiber bike in minutes.

All we’re saying is, crazy things have happened on Lanzarote. They filmed the sci-fi movie The Krull here. A story of an alien called the Beast and his band of Slayers making life difficult for hero Liam Neeson. The princess is taken to the Black forest and much evil is done and by the way there’s no bike path there. Go at your own risk to the castle. 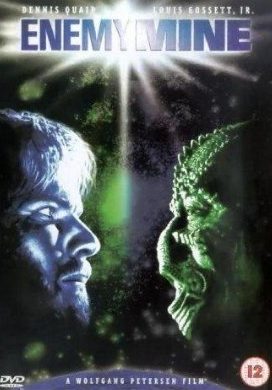 Is that enough to scare off a merry band of bike racers? Then what about Alien Mine, also filmed on this Canary rock? An interstellar war between humans and reptiles with Dennis Quaid as savior. Blood, destruction and laughable story structure. Dangerous things just occur on a regular basis on this island.

Lets all just say a short prayer for Cavendish and Columbia HTC. What with the screaming hot lava, vicious dinosaurs, alien reptiles, beasts, slayers and sex-starved cave girls, things could get pretty rough. This is no training camp vacation and Mark Cavendish may rue the day the Columbia brass said, pack your bags, boys, we’re Canary-bound.

The sooner they get off the island of Lanzarote, the better.