Casper upends Sky to win stage one in Tour of Oman. Abdul was right.

Home/Humor/Casper upends Sky to win stage one in Tour of Oman. Abdul was right.

Casper upends Sky to win stage one in Tour of Oman. Abdul was right.

Yes, Jimmy Casper’s name is now carved in stone or bronze as the first stage winner in the inaugural Tour of Oman. The Frenchman who rides for Saur-Sojasun bested Edvald Boasson Hagen and his Sky train and Kenny Dehaes (Omega Pharma-Lotto).

“I knew it would be difficult to beat riders like Boonen and Chicchi who showed they’re on form in Qatar but I got my sprint just right,” said Casper.

Felicitations Jimmy. The Saur-Sojasun campaign for a  wildcard invite to the Tour de France is off to a flying start. Nothing like a win in front of the tour bosses to jack up the odds.

How big was this win for Caspar? He had it measured down to the centimeter. “I followed the Team Sky lead out and was on Boasson Hagen’s wheel. He jumped with about 150m to go and then I went on the lift with about fifty meters to go. It was late but I just beat him at the line by about 20 centimeters. Not much but one centimeter is enough.” 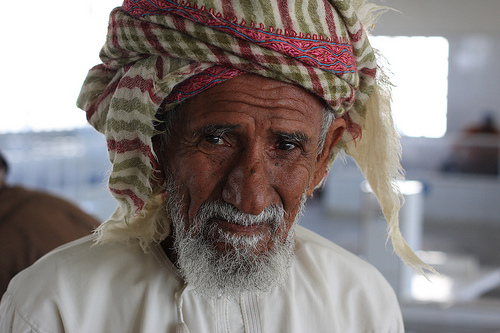 The raucous night time circuit race was held before throngs of fans on the Muscat Corniche. Riders tackled a 16 lap down- and- back course along the waterfront between the Riyam and Fish roundabouts.

Four laps later they were joined by German Champion Martin Reimer (Cervelo TestTeam), Peter Wrolich (Milram) and former-World Champion Alessandro Ballan (BMC). Abdul had these moves dialed even before the guys did — although he had high hopes for Ballan.

However, it was Casper who had the fast twitch fibers working. The short, powerful rider took the win, stepped onto the podium and looked around for his kisses from the sexy harem girls. Uhh, no.

He did however score a vigorous congratulatory handshake from some dignitary in a white robe. No podium girls in Oman, only podium sheiks. Jimmy, you can always get a little champagne back at the hotel.