No Katusha or Tour for Badenov.

On one hand, it’s no surprise that international cartoon spy and vicious no-good-nik Boris Badenov was left off the all-Russian roster of Katusha, the Global Cycling Shindig.

After all, Badenov is in reality, not a cyclist, has no UCI points, has never had a result in a bike race of note. While he keep up a long-running and sported battle with Bullwinkle the moose and side kick Rocky the squirrel, nobody would really expect big things of Badenov in the Pyrenees or Alps.

Then again, is anyone thinking Egor Silin or Yuriy Trofimov will deliver a better ride than Boris? Badenov would have delivered the kids audience for the Tour and provided a sense of menace and evil machination that would have benefitted Katusha. As such, it’s a lost opportunity.

“We have decided against the inclusion of Badenov,” said team manager Andre Tchmil, who is the ‘fearless leader” of Katusha. “Boris was a strong candidate but we feel he is not ready for a tour. I think it was Cipollini’s idea but perhaps he was just joking.” 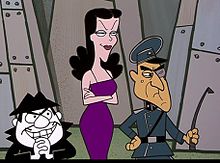 Tchmil is excited by the prospect of an all-russian tour squad but cautioned against any expectation of results. “Our performance, when we’ll cut the finishing line in Champs Elysees, won’t be judged by wins, but instead by the courage and the commitment we put in every single stage,” he said.

Other badass Russians curiously left off the Katusha roster include Ivan Drago from Rocky IV, Sergeant Yushin from Rambo, Ivan Korshunov from the movie Air Force One, and the sadly unsigned Russian bear Denis Menchov.

Faced with such omissions, Katusha’s Tchmil will be forced to go into the 2011 Tour with a squad high on Russians but low on firepower.