Boonen wins stage 5 in Tour of Qatar. The commemorative thong.

Home/Humor/Boonen wins stage 5 in Tour of Qatar. The commemorative thong.

Boonen wins stage 5 in Tour of Qatar. The commemorative thong.

Our time in the land of Q grows short, infidels. Soon this garden of cycling delights must close and we must bid adieu to Qatar, the Belgium of the sand dunes.

In today’s 142k stage to Madinat Al Shamal, fans cheered wildly as adopted son Tom Boonen scored his second stage win in a row. Qatar is Quickstep country and the team put on a show today.

They chased down a 14 man break starring overall leader Wouter Mol (Vacansoliel) and set up the sprint for the man locals call The Sheik. 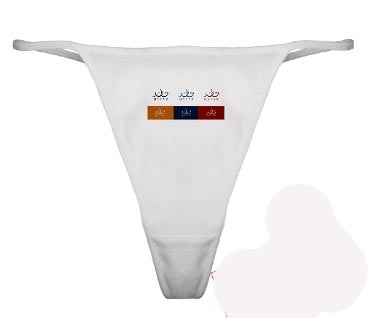 The spoils of Victory.

“I’m super happy to win again. It was a head wind and so it was hard to pass so I think I did the sprint right,” Boonen said.

The king of the cobbles appears in top form and highly motivated at the start of the 2010 season.

Standing on the podium, Boonen received the traditional champagne and kisses along with two camels, a madqan incense burner, a bag of dates and curiously enough a pair of signature Qatari thong underwear.

No doubt Boonen will be slipping that one underneath his Quick Step shorts.