The story isn’t getting more intriguing, it is getting stranger.

After the French company BigMat reneged on a letter of intent to co-sponsor the Garmin-Cervelo team for the coming season, the company is apparently in serious negotiations with Francaise des Jeux.

“It it not a criticism or defect on Jonathan’s part,” said Pierre Defaute, who handles public relations for BigMat. “It’s just he was missing, something we could not put our finger on but that we must have.” 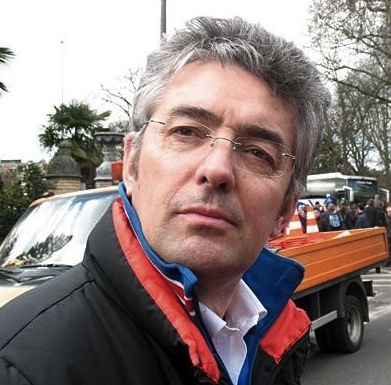 Officials at the large Home Depot-style company were at pains to describe just exactly what Vaughters did not possess. “It is a French thing. Certainly he is a man of style and culture and yet the ineffable is exactly that,
said Defaute. “One can only remark on its existence or absence — it is perhaps beyond the constraints of language to describe.”

BigMat apparently decided that it was Francaise des Jeux team manager Marc Madiot who had the requisite “je ne sais quoi.” According to Default, Madiot is the kind of partner they had been seeking. “Look at Madiot’s face — he is un homme de caractere,” said Default.

“You see a philosopher, a man unafraid to confront the existential questions of life, a bon vivant and yet a thinker who feels in his heart the suffering of the smallest creatures. He is part Camus, a bit of Gide, an Andre Breton of the bicycle.”

BigMat is rumored to be investing 3 million euro in the Francaise des Jeux squad and a wildcard entry into the 2012 Tour de France is all but assured. L’Équipe reports that talks are “well advanced and should finish with a partnership agreement for 2012.”

Reached for comment on his purported lack of “je ne sais quoi,” Vaughters disputed the vague allegations. “Marc is a good man but at the end of the day, I’ve got more “je ne sais quoi” than he ever had. I reek ineffable. And by the way, I’ve read Breton in the original French.”