Home/Humor/Belgian Frites. Would Belgian bike racing be the same without them?

In our second installment of Dutch treats to celebrate the fast approaching Belgian racing season, we tackle the tantalizing subject of Belgian frites, the beloved Dutch snack.

Bike racing and Belgian frites are so deeply intertwined in the culture that it’s fair to ask if one could survive without the other. There is no tour of Flanders without Tour of Frites. Potatoes meet Peloton.

Paul Ilegems, author of four, count ’em, four books on the subject, claims in all seriousness that “the frite stand is the only national symbol in Belgium,” noting that the country is divided between people who speak Flemish and those who speak French. Of course, the other unifying element would be the national craze for bike racing. 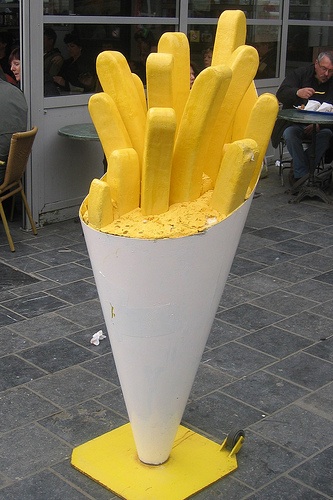 Ilegems himself is so obsessed with the snack that he assembled an 80-piece exhibit on frite culture, which consists of paintings, sculptures and other artifacts. And he is not alone in his reverence. In 2007, the medieval town of Brugge opened a Belgian Frite museum. What a brilliant excuse to eat fast food — “uhh, I just stopped at the museum, I was hungry.”

Frite facts: research shows Belgium’s 6.5 million Dutch-speakers and 4 million Francophones average a weekly visit to one of their country’s 5,000 or so fry shops and shacks. Dutch-speakers call such shops “frietkotten.” Francophones call them “baraques a frites.” (Nobody calls them McDonalds.) Either way, the translation is “fry hovel” — and that’s seen as a compliment.

Belgians fry shacks serve heaps of finger-thick fries wrapped in paper cones and topped by any of 20 or 30 sauces, from Sauce Andalouse (tomato and paprika), Sauce Dynamite (spicy!) or Sauce Crocodile (tamarind-flavored). You can be sure some frietkotten shop has a Sauce Cannibal (a Merckx fave) and a Tornado Tom sauce – which adds a light dusting of cocaine.

There is some controversy as to who invented the frite, with the French sneaking in the back door for credit. Not true, however. Belgian historian Jo Gerard reveals that potatoes were already fried in 1680 in the Netherlands, in the area of “the Meuse valley between Dinant and Liège, Belgium.” Throw that trivia out next time you’re watching the Liege-Bastogne-Liege classic.

We are indebted the the brilliant Belgianfries.com for this definitive definition of the Belgian frite.

This website is the go-to resource for all things frite. Michael Mes is the self proclaimed Missionary of the Belgian Frites. Twisted Spoke highly recommends a visit to immerse yourself in the history, recipes, culinary paraphernalia and an exhaustive data base of every frite shop in the entire universe.

He even consults if you want to open the first Belgian Frite shack in Mississippi or Brisbane or the Kazak capital of Astana. Vino Frites, anyone?

What would be cooler than a mobile Twisted Spoke frite shop traveling the route of the Tour of California? We’ll concoct a Tex-Mex Armstrong Sauce just for the occasion. So many frites, so little time.

In any case, you are now frite fortified and ready for Omloop Het Nieuwsblad and Kuurne-Brussels-Kuurne. Fast food, fast races.

(Thursday we’ll have our third installment of Dutch treats to celebrate the opening of the classics season. Beer anyone?)