Another win for Benitez in stage 2 of Vuelta Chihuahua. A double dos, amigo.

Another win for Benitez in stage 2 of Vuelta Chihuahua. A double dos, amigo.

Javier Benitez (Contentpolis) won his second dogfight in the Vuelta Chihuahua. Todays’ etapa odometer read 117 kilometers from Cuauhtemoc to San Juanito. Another smokin’ day in the Chihuahua, the race of the yapping toy dog. 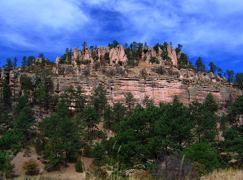 They didn’t get too far — no more than two minutes ahead as the Tecos team of race leader “el Pollo” Michael Rasmussen kept the safety leash tighter than a nervous dad with a hyper-active 4 year old boy. That is to say, mucho tight.

However, our man from Colorado, Mr. Bowman, surely got in some free Spanish lessons from his tutors in the breakaway. Who needs that pricey Roosetta Stone language software? “Hey, como se dice, lactic acid, fellas?”

The climbs of the el Terrero, (category 4) and el Nogal (category 3) proved no problem for winner Benitez. The fire drill into San Juanito was arriba-arriba madness — in the foreshortened photo it appears the entire peloton has Benitez’ wheel. But he squashed Michael Kreder (Rabobank) and José Antonio Carrasco (Andalucía-Caja Sur) like cucarachas.

“Today’s win was easier than yesterday’s, my legs were heavier then,” said Benitez. (Maybe sprinters should weigh their legs each morning and then they’d know what do to.) “I still think it will be hard to win as many stages as last year, but after today I’m going to try.”

I think I bonked, senor.

It was a sad and miserable day for the cartoon cousin of Speedy Gonzales, senor Slowpoke Rodriguez. The LosLoony Tunes rider disappeared out the back and missed the time cut. Generous race officials, taking into account Slowpoke’s huge fan base, decided to keep him in the race. The Chihuahua is full of love, amigos.

The crazy day-glo limeade jersey remains on the skinny backside of “el Pollo.” Ahh, but Wednesday is “la etapa reina,” the queen stage of the majestic Chihuahua. On the menu: four categorised climbs: one category 1, one category 2 and two category 4 ascents. We shall see what a chicken can do– crossing the road, easy. Crossing over the mountains, not so much. With four riders, including Mancebo, Moreno and Seville all within 4 seconds, expect a dogfight.

There will be tequila shots in San Juanito tonight. Two wins for Benitez the sprinter and what does he care about mountains? Make that dos tequilas! Manana, my cycling compadres.