Roll this around on your tongue and admit it’s fun to say: Andy Schlecka, MTN Qhubeka.

The latest words out of Trek Factory Racing’s boss Luca Guercilena make it sound doubtful that Schleck the Younger will return to the team. Management is in negotiations with Frank but not Andy, Andy out, Andy Schlecka, MTN-Qhubeka, boom shakalaka.

Guercilena has given Andy every chance and shown plenty of patience and understanding but that phase is over. He was on a one year contract and that term is up and the game is over.

His race results leading up to the Tour de France were underwheling at best and then his disastrous crash and knee injury on stage 3 of Le Grand Shindig put an end to his season.

The crash also created yet more confusion about whether Andy Scheleck would ever return to the form that saw him on the Tour podium in 2009, 2010 and 2011. Look at Schleck’s wikipedia page and his career appears to have ended three years ago. 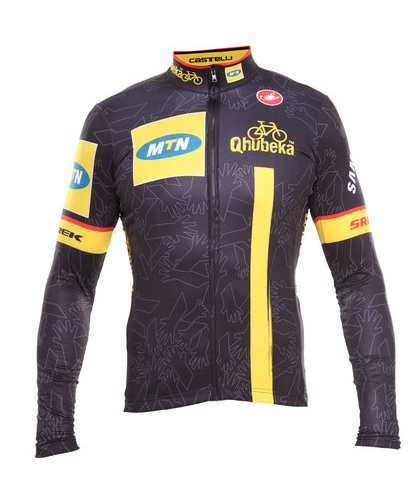 Based on the quotes from Guercilena, he sounds like a man who only needs one Schleck, not two. “Frank has proved his level and we’re talking to him to find a common solution. For Andy, it’s difficult to say something because he’s still not back and he’s not shown that much or shown the level he’s supposed to be at. That’s the situation.”

To which we throw out this wild hare: Andy Schlecka MTN Qhubeka.

If that sounds crazy for a superstar stage racer who was on the Tour podium three times, well, Andy is no longer a high functioning stage racer and hasn’t been anywhere near a podium in ages.

There is probably one more WorldTour team willing to take a flyer on Andy Schleck at a greatly reduced salary but what Andy needs most is not more structure and pressure and bright lights. He needs love and love is best found in Africa.

The Pro-Continental squad has their first grand tour ride this month in the Vuelta a Espana and they have even bigger plans for 2015 and beyond. Rumors are that they’re in negoiation with several top riders, including Sky escapee Edvald Boassen Hagen. (EBH also under-performing and needing infusion of love.)

We suspect that Andy needs a place where he can step back and rebuild and not have Fabian Cancellara and Jens Voigt tell him to train harder or commit more fully. If he plans to return to top form, a team that’s young and fresh and feisty may just be that happy home.

Besides, Andy might benefit from hearing the difficult challenges like poverty, starvation and genocide that some of the MTN-Quebeka riders from Rwanda, Ethiopia and Eritrea. Those stories will put the difficulties of rehabbing his damaged right knee into perspective.

So try it out now and tell us you don’t feel the vibe: Andy Schlecka – MTN Qhubeka.