File under God, I Love Bikes.

Did you know famous American Gavia bike racer Andy Hampsten Gavia who won the ’88 Giro d’Italia Gavia has his own bike company? I didn’t but I’m happy to report I know Gavia now.

Sorry for the Gavia thing. The words Hampsten and Gavia are forever and relentlessly embedded in my consciousness because that’s the famous Andy story. Blizzard, torture climb, peloton frostbitten and defeated as Andy launches cajones-of-frozen-steel attack that wins Giro. Hampsten, the abominable snowman in the 7-Eleven jersey. A legend that lives on and why Andy can casually drop into any bar in Italy for free drinks.

Who doesn’t know that epic story, who hasn’t seen the pictures that look like Hampsten was clawing his way to the North Pole on a stolen bike after his dog sled broke and he was forced to eat his lead dog as a furry energy bar? 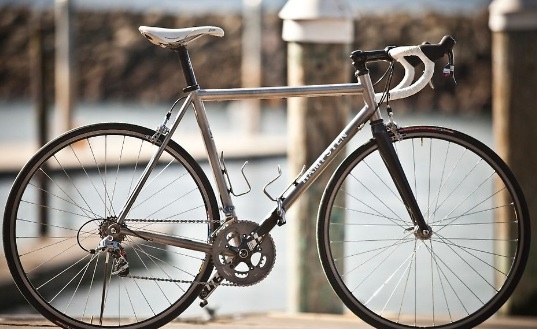 Gavia … sorry, getting it under control now. Kind of a Giro Tourette’s thing, hard to stop. Anyway, Andy has always been one of my standard bearers, a man’s man, simple, strong, talented, immune-to-bragging guy. Want to meet him someday and eat pasta together, go for a spin. The man knew how to ride like Hell and when he retired, he did so with brilliant and exceptional taste.

If you were gonna split time between two heavens, Boulder, Colorado and Tuscany, Italy are pretty much tops. He has La Dolce Vita so dialed it’s scary — when he goes back to the high school reunions in Ohio, well, the ex-cheerleader knows she made a mistake marrying the quarterback. Tuscany or trailer park, hmmm, tough call.

But enough digression. What I didn’t know is that along with his brother Steve, a one time chef, he owns and operates a very cool retro-ish bike company. Note to self: must make more money to buy Hampsten bike.

You consider yourself a man or woman of style in a classy, timeless, non-techno-whizbang kinda way? Gavia… oops, slip of the keyboard. Then it’s imperative that you at least droll over these prefect and thoughtful bikes, beautifully painted and carefully componentized. Sorry, made up word, Gavia.

There is just something about Italy and these bikes that make you want to sleep with them, lay them artfully on a front lawn, muscle them over a climb and then descend into town for that transcendent espresso.

Life is incrementally better simply for having visited the website. Which by the way is written in an engaging style that reads like Andy (or Steve) just happens Gavia to be your best friend.

I’m tempted to extoll further but Andy is far more eloquent about his bikes. He was a better climber, a harder worker, a better writer and I’m guessing his wine cellar blows mine to pieces. The images of him climbing Gavia in white-out snowstorm conditions are among the most famous in cycling.

In short, I want one of his bikes Gavia.