Genius is a bastardized word.

Allen Lim, the genius team physiologist for Radio Shack, will be the first to tell you that. He’s brilliant and dresses like a hipster with pork pie hat and swing dance shirt but he simply loves bike racing and working with the most dedicated bike racers in the world.

I’ll just get this out of the way and say every time I talk to Lim –Tour of California, France, Colorado — he will fill my head with so many fascinating ideas and advances in the world of sports medicine and endurance sport training that my head spins.

I try to make a point to corner him because what he’s doing is what every smart team will do in the next few years. Jonathan Vaughters discovered him in Boulder for Garmin, then Radio Shack wrote a bigger pay check. Lance always buys the best. 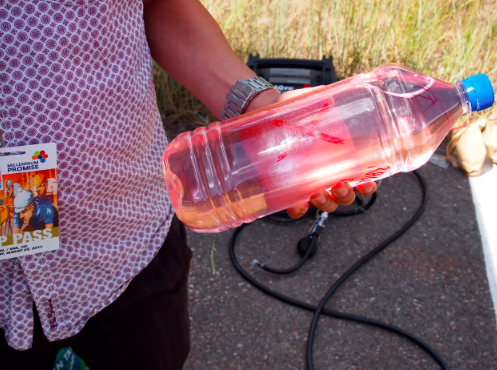 I took a bet today in Vail that the story of the day would be the comeback of Levi Leipheimer in the time trial after his nervous, small cojones descent of Independence Pass into Aspen.

The younger, bolder Tejay Van Garderen took the risks on the wet, technical descent and deserved the win and the jersey.

I’m covering the US Pro Cycling Challenge for Cyclesport Magazine and Thursday, in the megabucks resort town of Vail, I rolled the dice on Levi.

So if you want to tell that story with some depth, you talk to Lim. He’s the guy that keeps the old diesel engines like Chris Horner and Andreas Kloden and Levi Leipheimer running so well and so fast. While he joked with me that half the time he thinks their mothers would do a better job of taking care of them and giving them the support they need, his innovations keep making them accelerate.

I could tell you a dozen things Lim did for the high altitude, thin air, uphill time trial in Vail. The things that would put Levi back in the leader’s jersey and in control of the entire race.

But I’ll just tell you one story for now. The team took Levi from the stage finish in Aspen immediately that evening to a private house in Vail, minutes from the time trial course. Extra calm, full massage, relaxed dinner, early bedtime — everything you would need to optimize recovery. That’s not just sports science, that’s smart thinking and logistics.

One of the many intriguing things Lim told me was about the massage. I asked him if Levi needed anything specific or out of the ordinary after that bone chilling descent of Independence Pass. He said yes, it wasn’t the legs that needed work, it was Levi’s jaw.

Levi was clenching his teeth so much on that cold and dangerous decent that he needed massage work around his mandibles –his jaw — to relax him again and bring him back to full recovery.

Levi beat Christian Vande Velde by barely a half second. His jaw was loose and relaxed and his breathing was good. That is a measure of victory, of a tour won, on an operating budget justified, of sponsors thrilled and more top riders signed.

While Allen Lim insists he’s not a genius, he knows a thousand little ways to help his rider win a bike race.