A miracle for Schleck. Lighting a candle in Lourdes.

A miracle for Schleck. Lighting a candle in Lourdes.

A candle for Andy Schleck.

To win the Tour de France Andy Schleck needs a miracle. Today, I bought him one.

Here in the Mid-Pyrenees town of Lourdes, French capital of miracles and Roman Catholic pilgrimage site, I paid my 2.5 euros at the Sanctuary of our Lady of Lourdes and lit a candle for Schleck.

I beseeched the Almighty that Andy might take two minutes out of his rival Alberto Contador on the slopes of Tourmalet and take the precious maillot jaune to Paris.

I did not bring back a bottle of the holy waters from the famed Grotto, which are believed to possess healing powers. There’s no doubt the ideal solution would have been to bath Andy’s legs in the water moments before sign-in. Or squirt the holy water from the team car as Schleck appoaches the defining and demanding climb of Tourmalet or Torment depending on pronounciation.

The Catholic Church officially recognizes 67 miraculous healings, which according to wikipedia, they stringently examine for authenticity. Would not the skinny little climber from Luxembourg coming from behind to win the Tour de France qualify as miracle number 68? It does in my race bible. 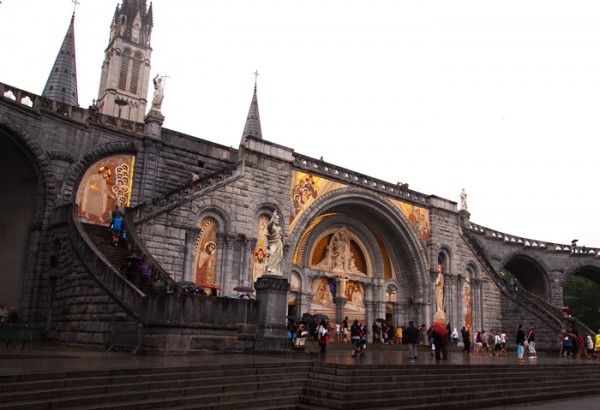 Millions of people have made pilgrimages to the Grotto in Lourdes where in 1858 an impoverished teenage girl named Bernadette Soubirous began seeing visions of the Virgin Mary. She also saw an image of tour founder Henri Desgrange but that was less enlightening.

While not a deeply religious person, I’m seeing a vision of Andy Schleck standing one step higher on the podium than Spaniard Alberto Contador. Le Miracle du Tour!

Who knew that by some strangle tangential but meaningful way Schleck and I would have our fates so inextricably bound. That candle is possibly the key to victory, a triumph against daunting odds.

Should Schleck win, I think it only fair that I receive a portion of the team prize, a Specialized race bike and an invite to go fishing with Andy. I ask no more and no less, such is my humble nature.

I cannot guarantee victory, I can only state the miracle was requested. The big Director Sportif in the sky has a long list of miracles to perform. Curing the blind, the deranged, those wracked by sickness and pain, sadness and terrible loss. There is no doubt a Tour win hangs low on the list of priorities, the lantern rouge of miracles.

Still, here in the holy town of Lourdes, we dream, we knell in prayer, we see the bold yellow light.